The importance of a mother’s role is too often taken for granted. They not only display, in most cases, unwavering love and support, but also endure great sacrifice to provide for those whom they love. The lengths to which a mother will go to protect her family is what drives Mehboob Khan’s sensational epic Mother India. In Khan’s eyes, mothers, and women in general, are the soil that fertilized India and the world as whole. They weathered the harsh storms of life and held up their children on their shoulders as they waded through the devastating currents of change.

The first film from India to be nominated for an Academy Award in the Best Foreign Film category, and a remake of Khan’s own 1940 film Aurat, Mother India is a sight to behold. It is a Technicolor spectacle whose raw emotion oozes through every single pore. Despite the vibrant musical numbers and moments of slapstick comedy, the themes of poverty and tragedy feel right at home alongside Italian neo-realism films like Bicycle Thieves and Stromboli.

Spanning several decades, the story revolves around Radha (Nargis) and how her lifelong struggles ultimately reshapes the views of an entire village. Days after her wedding Radha learns that her new mother-in-law struck a deal with a crooked moneylender, Sukhilala (Kanhaiya Lal), in order to pay for the lavish ceremony. As Sukhilala’s deal yields a high interest rate, Radha and her husband Shamu (Raaj Kumar) endure long hours in the crop fields trying to pay off a debt that seemingly has no end. With their family growing, and Sukhilala continuing to bleeding them dry, Radha struggles to keep her family fed and safe in the face of poverty. Things get increasingly difficult for Radha as she is forced to endure natural disasters, devastating tragedy and class persecution.

Considering the levels of pain and sacrifice that Radha endures, it should not come as a surprise that Khan makes her the symbol of India as a whole. She is a woman who not only sticks to her principles, but is also willing to do anything she can to ensure that her sons Birju (Sunil Dutt) and Ramu (Rajendra Kumar) are raised with a sense of honour and decency. Radha is even forced to make the ultimate sacrifice just to emphasize the importance of treating women of all ages with the utmost respect and care. 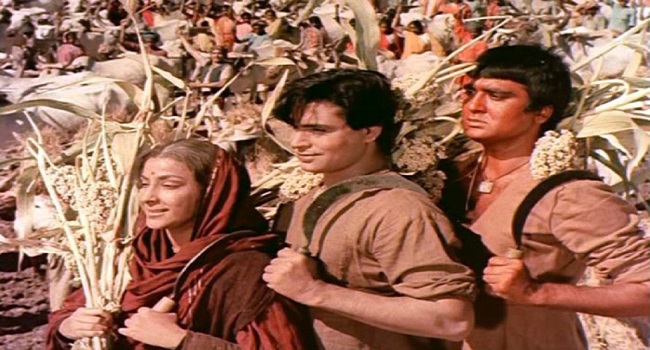 One of Mother India’s greatest strengths is the way in which Mehboob Khan gives both a sweeping and intimidate feel to Radha’s hardships. In some scenes all he needs is a simple shot of the character’s faces to emphasize the weariness of endless persecution. At other times he implores grand montages and flashbacks to show the painful passage in time. The epic visual splendor of Mother India is reminiscent of films like Gone with the Wind and Black Narcissus. There are so many great shots and images, including several lavishly orchestrated musical numbers, that linger in our minds long after the film ends. One example of this comes after a storm ravishes the land and Radha, holding her recently deceased newborn, instructs her starving sons not to take any food from Sukhilala, who has stop by to offer his assistance. Another powerful moment comes when a distraught Radha is trying to find her wounded son laying within a burning field of crops.

To her credit, Nargis is outstanding in the lead role. She gives Radha so much depth that we feel the magnitude of the brief few moments of joy she experiences just as much as we do the gut-wrenching sadness that flows like water to the crops. If Nargis’ Radha is the heart and unwavering strength of India, then Sunil Dutt’s Birju is the rage of the poor. Dutt, and the child actor who plays the younger version of Birju, does a great job of portraying a man who simply wants a fair shake for his mother and the rest of the family. He represents the anger that many of the impoverished feel being frequently swindle by the rich. In contrast Kanhaiya Lal’s Sukhilala, who leans more towards slapstick than any other in the film, provides a sense of arrogance and entitlement that makes him a villain you cannot help but hate.

It is easy to see why Mother India was such a popular and influential film for its time. Aside from providing the blueprint that the Bollywood industry would follow for the next 50 plus years, it is a film whose themes still feels relevant and powerful today. Sure some of the melodrama may seem dated by today’s standards, but it is actually nicely balanced when considering the era in which it was made. Mother India is a must see not only for those looking to dip their feet into the world of Bollywood, but also those who simple love epic storytelling done right.