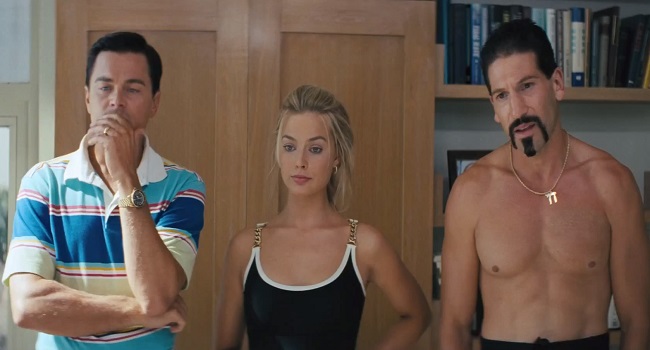 Based on Jordan Belfort’s autobiographical novel, The Wolf of Wall Street is the story of Belfort’s rise to the top of, and subsequent fall from, Wall Street in the late 80s and early 90s. The film follows Belfort (Leonardo DiCaprio) as he decides to sell penny stocks to common people in order to make lots of money and build a business for himself. His empire not only brings him everything he can imagine and more, but also puts him on the radar of the FBI who investigate him for money laundering and all sorts of other illegal activities. Belfort’s life, and the film itself, can be described as a wild roller coaster ride filled with money, drugs, women, and material excess.

At a three-hour running time, this is Martin Scorsese reveling in debauchery. He gleefully embraces the depraved characters within his film and maximizes them to their full effect. It is also one of the most entertaining films of his career. The Wolf of Wall Street could have felt dragged out, especially given its length, but Scorsese actually manages to leave the audience wanting more.

As Belfort, Leonardo DiCaprio gives a performance for the ages. It is a role where he and the character he portrays must go to the extreme in almost every way. Belfort snorts mountains of cocaine and immerses himself in as many women as any man could want and yet it is never enough in his eyes. It is a role that requires DiCaprio to play it big and he not only steps up to the plate, but hits it out of the ballpark. The way he delivers some of Belfort’s monologues only further showcases the growth he has shown as an actor since becoming a major star 15 years ago with Titanic. DiCaprio also displays a lighter side to himself that audiences rarely see. He provides many of the film’s big laughs in ways that only help to emphasize why DiCaprio needs to add more comedies to his resume.

While DiCaprio is the star of the film, he is backed up by an amazing ensemble cast that includes Jonah Hill, Jean Dujardin, Kyle Chandler, Rob Reiner, Jon Favreau, Joanna Lumley, and Matthew McConaughey. Though each of the supporting characters gets their moment to stand out, it is Margot Robbie that makes the biggest impression. As Belfort’s gorgeous second wife Naomi, Robbie definitely shows that she can keep up with the likes of DiCaprio. She effectively conveys a woman striving for great things in life only to become alienated by her husband’s excessive behavior.

Terence Winters’ screenplay takes the classic rise-and-fall scenario and infuses it with some great dialogue and voice-over narration. There is an amazing scene in the film where Belfort meets a slimy Swiss banker, Jean-Jacques Samuel (Jean Dujardin), and Winters uses dueling voice-overs to illustrate how neither man likes the other. Winters has Belfort break down the fourth wall at times to also add another level of flair to the film.

With help from the amazing camerawork of Rodrigo Prieto, and the brilliant cutting of longtime Scorsese collaborator Thelma Schoonmaker, the director crafts one of the wildest films to come from the studio system this year. Much of this is achieved through Scorsese’s wandering compositions and strange framing devices. This is Scorsese at his most rambunctious and most determined to give his audience a unique experience.

The Wolf of Wall Street is certainly a film that will test people’s morals as its characters are people that are definitely unlikeable. Yet, it is the kind of film that is just so much fun to watch that you will wish you were at those parties…depravity and all.