The 2013 Blood in the Snow Canadian Film Festival will take place from November 29th to December 1st 2013 to the Carlton. A total of 23 films (22 of which are premieres) will be shown during 8 programs of 7 features and 16 shorts, from filmmakers all across Canada. This year’s program is set to be even better and more diverse than last year’s. The programming committee brought in films that stretch from horror thrillers (Evangeline/Clean Break), haunted houses (The Ghostkeepers), body horror (Thanatomorphose) crime thrillers (Criminal), devil worshiping (Blood Riders: The Devil Rides With Us) and even a bit of disco (Discopath).

Advanced individual tickets are only $10 ($12 at the door) and early bird festival passes for the price of $60 ($70 at the door) available both online and at Suspect Video. The festival is sponsored by FANGORIA magazine, Black Flag TV, Anchor Bay Entertainment and Suspect Video.

7:00 PM – EVANGELINE (dir. Karen Lam) North American Premiere
Evangeline is a revenge fantasy about a young woman who is brutally killed by a group of sociopathic college frat boys, and comes back from the dead to seek vengeance. Evangeline Pullman (Kat de Lieva) has just escaped from her sheltered upbringing to reinvent herself in college. As she begins to break out of her shell, she attracts the attention of a violent fraternity leader (Richard Harmon) and his two cohorts. Beaten and dumped in the woods to die, Evangeline finds herself trapped in a supernatural nightmare, where she must choose between vengeance and redemption.

9:30 PM –THANATOMORPHOSE (dir. Éric Falardeau) Toronto Premiere
Thanatomorphose is a French word meaning the visible signs of an organism’s decomposition caused by death. One day, a young and beautiful girl a wakes up and finds her flesh rotting. An official selection in the 2013 Fantasia Film Festival.

4:00 PM – THE GHOSTKEEPERS (dir. Anthony Mann) Toronto Premiere
The cast of a horror movie reunites to celebrate their success and get more than they bargained for in Marlowe House. Can they survive a horrifying night of Ghosts, Demonic Possessions, Murder and REVENGE?

7:00 PM – BITS Short Film Showcase RUBY’S SECRET (dir. Kalen Artinian) North American Premiere
A young man and woman hit it off at a bar and head back to her apartment. The man soon discovers this “one night stand” is more than he bargained for.

9:30 PM – CLEAN BREAK (dir. Tricia Lee) Canadian Premiere
A psycho girlfriend, Tracy, moves in with her boyfriend Scott and his two roommates, Cam and Dan, only to start targeting them when they get in the way of her plans for the perfect relationship.

Midnight – BLOOD RIDERS: THE DEVIL RIDES WITH US (dir. Lari Teräs) World Premiere
Blood Riders: The Devil Rides with Us” is a blood soaked adventure comedy about 4 high school grads who decide to find excitement in their lives by stealing a car. When dumping the stolen car in the woods, they find a body of a dead girl in the trunk. Reluctant to call the cops, the friends ask help from Eric who claims to see dead bodies almost on a daily basis. Following a heated argument, Eric gets killed and now the friends have a second body to dispose of. 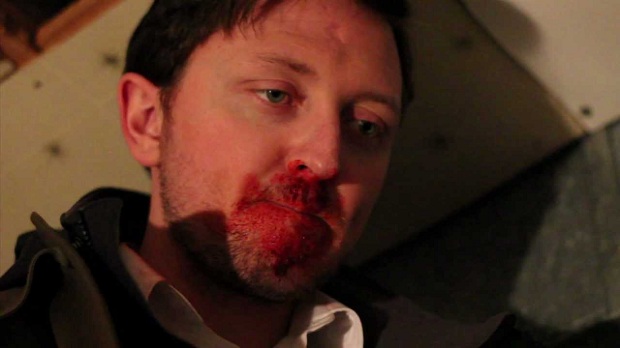 4:00 PM – CRIMINAL (dir. Elliot Dawson-Clark) World Premiere
After his wife is murdered, Innis decides to take the law into his own hands. But as he comes closer to catching the man that killed his wife, Innis discovers the dark side of justice and finds the will to never look back.

7:00 PM – DISCOPATH (dir. Renaud Gauthier) Toronto Premiere
The mid-70’s: a timid young New Yorker leads an uneventful life until he is fatefully exposed to the pulsating rhythms of a brand-new genre of music: disco. Unable to control his murderous impulses that stem from a traumatic childhood experience, Duane Lewis transforms into a dangerous serial killer exiled to Montreal.