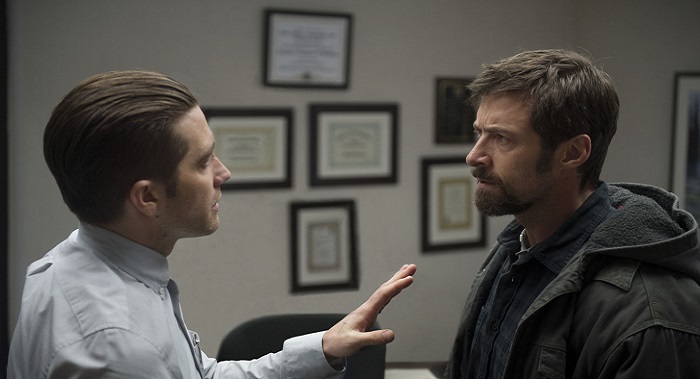 What would you do if your child was abducted? What if every bone in your body knew that they were alive and waiting for you to do something to help them? Would you follow the rules and wait for the police to do their job? These are the questions at the heart of Denis Villeneuve’s new film Prisoners.

It’s Thanksgiving Day and the Dover family head over the block to the Birch’s home for food and football. The families are a good match in almost every way. The Dover’s teenage son Ralph (Dylan Minnette) is about the same age as Eliza Birch (Zoe Soul); while the families’ two young daughters Anna Dover (Erin Gerasimovich) and Joy Birch (Kyla Drew Simmons) are inseparable. While out on a walk before dinner, the four children encounter a mysterious RV, Anna and Joy’s youthful curiosity is peaked, but they are pulled away from the vehicle by their older siblings. Later that afternoon Anna and Joy decide to go back to the Dover’s house, without their older siblings, and do not return. This sets the stage for a tense experience that will ultimately test the moral fiber of both families.

Working at the peak of his craft, Denis Villeneuve breathes exciting life into Aaron Guzikowski’s script. He creates a morally complex film that keeps the viewers on the edge of their seats. A fantastic example of this is the scene in the wooded area where the police first catch up with the suspected RV. Villeneuve captures the tension as the officers approach the vehicle trying to determine whether or not the girls are inside. He also ensures that he allows the characters room to grow amidst all the tense moments.

Villeneuve does a good job of not only introducing, but establishing the main players in the film. Detective Loki (Jake Gyllenhaal) is portrayed as a lonely soul who possesses the single-mindedness to succeed with police work. He is nicely contrasts the parents of the younger girls who, understandably given the situation, are driven by emotion. Keller Dover (Hugh Jackman), a tradesman and hunter who prides himself on being prepared for any event, locks into a particular mind state from the moment his daughter Anna is abducted. His drastic actions, including the abduction and abuse of the vehicle’s owner, Alex Jones (Paul Dano), with the help of Franklin Birch (Terrence Howard), will have lasting ramifications for everyone. Even Franklin’s wife, Nancy Birch (Viola Davis), must struggle to find strength when she discovers some of the morally questionable activities that have occurred. These characters would not resonate as well as they do if it was not for the casts’ strong performances.

A key element in building suspense in any drama is the musical score. Jóhann Jóhannsson’s low eerie tones mixed with full symphonic pieces support the sequence of events and help to build anxiety and suspense. Veteran cinematographer Roger Deakins, whose recent credits include Skyfall and True Grit, chooses lighting and colours that serve the film well. The complete lack of light in the aforementioned encounter with the RV, bordered by the pitch dark forest raises the level of suspense.

Prisoners is an excellent story that presents the viewer with several important moral and ethical questions. A sharply written script, strong acting and expert direction, is why Prisoners is a film that I can highly recommend.