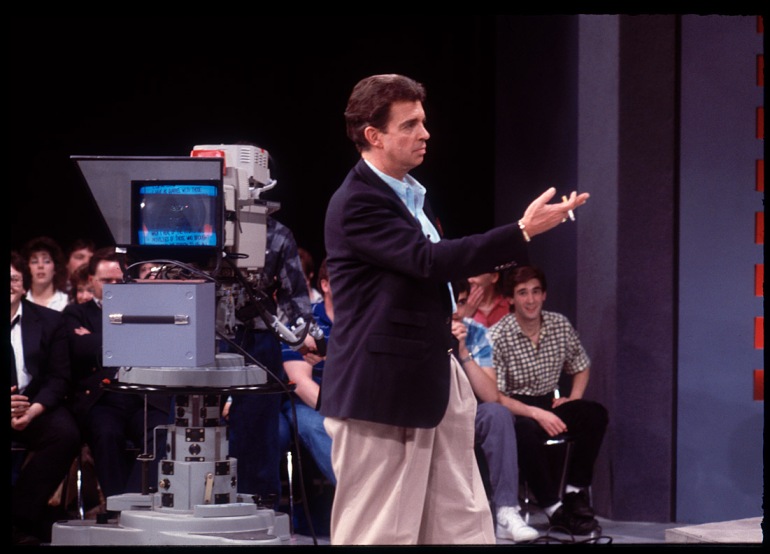 Before Bill O’Reilly and Glenn Beck became the faces of staunch right wing conservatism there was Morton Downey Jr. He was a man whose brash in your face approach would forever change the television landscape. Évocateur: The Morton Downey Jr. Movie charts the unexpected rise, and subsequent fall, of one of the most infamous men in daytime talk show history. Downey Jr.’s brand of sensationalism inadvertently became the formula that both the O’ Reillys of the world and the reality television genre would embrace years later.

Similar to the shows he inspired, Downey Jr.’s appeal was that he portrayed himself as the voice of the common man. He would fearlessly get in his opponents faces and berate them until they either tripped over their own words or stormed off in anger. In some cases the guest were so riled up that they literally wanted to fight Downey Jr. Of course this was exactly what Morton Downey Jr. would hope for. As the film points out, he had a flare for theatrics and knew how keep himself in the public eye.

Directors Seth Karmer, Daniel A. Miller, and Jeremy Newberger’s film attempts to show that Morton Downey Jr.’s obsession with fame ran deeper than just ratings. They present Downey Jr. as a man who was haunted by the success of his father, singer Morton Downey Sr. The quest to surpass his father’s level of fame would both motivate his rises and be his ultimate downfall.

Though the father/son dynamic is interesting, the film does not go as deep into exploring the concept as one would hope. Evocateur also misses a big opportunity to delve into the people who really helped Downey’s ascension to fame, his loyal fans. Though the directors interview a few of the show’s fans, the film could have explored the psychological nature of the mob-like mentality, which his audiences displayed on a daily basis, much further. Especially considering that they embraced, and helped to foster, Downey Jr.’s bully style persona.

Due to the straightforward nature of the documentary, Évocateur does tend to feel a little too safe at times. The animated re-enactments are used sparingly as are the interviews with the likes of Sally Jessy Raphael, Gloria Allred, Pat Buchanan, Alan Dershowitz, and Chris Elliott. However what keeps Évocateur moving is the archival footage of Downey Jr. The fire he brought to the show coupled with his ability to spin complex issues into something that was simply black or white, in his eyes at least, is compelling to watch. Évocateur: The Morton Downey Jr. Movie may be not be as daring as the man it documents, but it serves as a decent introduction to one of the most polarizing individuals in television history.