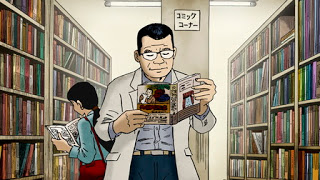 If you are a fan of manga, then you are most likely aware of the works of Yoshihiro Tatsumi. However if you are unfamiliar with either manga or Yoshihiro Tatsumi, you will be itching to find out more after watching the film Tatsumi. While the film is predominantly a biopic, it does not follow the typical conventions of the genre. This provides director Eric Khoo with the freedom to tell Yoshihiro Tatsumi’s life story the best way he knows how, through Tatsumi’s artwork.

Based on Yoshihiro Tatsumi’s autobiographical work, A Drifting Life and other short stories, the film tells his life story while interjecting five of his fictional gekiga stories. The stories include:“Hell”, about a photographer who is haunted by the truth behind a photo he took after the bombing of Hiroshima; The peculiar “Beloved Monkey”, a tale about a factory worker and his pet monkey; “Just a Man”, about a sexually frustrated husband who longs for an affair with a woman he actually loves; “Occupied” which focuses on a children’s cartoonist who becomes obsessed with lewd drawings in a public restroom and finally, “Good-Bye” which revolves around the broken relationship between a prostitute and her frequently drunken father during the Second World War.

While all five stories deal with aspects of loneliness, sexual frustration and being caught in a type of internal hell; the style in which each story is told is very unique. The first two stories, which Tatsumi remarks were made in the 70s, are told in black and white. As the film proceeds we see colour being used more frequently and in very interesting ways. The animation style used in each segment not only shows Tatsumi’s progression as an artist, but also effectively enhances the overall sense of sorrow that resides in many of his main characters. This is especially noticeable in the standout stories that bookend the film.

Tatsumi’s seamless blending of the stories with Tatsumi’s tale is a bit of a blessing and curse for the film. At times the stories tend to overshadow Tatsumi’s own life story. In regards to Yoshihiro Tatsumi’s own life, Khoo opts to highlight key events in his life. He focuses on how Tatsumi created the style known as gekiga as a way of separating his adult orientated work from traditional manga, which at the time was only associated with children’s literature. Khoo also provides insight into Yoshihiro Tatsumi’s relationship with famed manga artist, and mentor, Osamu Tezuka, as well as the struggles that he faced in his family life.

Although these segments are insightful, Tatsumi would have benefitted a little more by cutting out one of the five stories and providing even further knowledge into Yoshihiro Tatsumi life. At times it feels that Khoo is only scratching the surface. Regardless, Eric Khoo’s film ultimately succeeds in introducing a whole new generation to Yoshihiro Tatsumi. Through wonderful animation and an engaging mix of fact and fiction, Tatsumi is a solid film that will have you inspired to seek out the various works of Tatsumi.