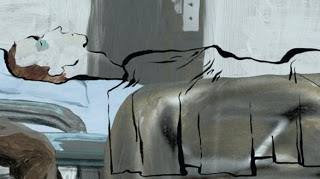 The name Claudiu Crulic may not be a household name in most parts of the world, but it should be. He serves as a harsh reminder of how easy the world you know can be taken away in the blink of an eye. The tragic tale of Crulic’s short life is the focus of Anca Damian’s documentary, Crulic: The Path to Beyond. The film examines how miscarried justice led to Crulic’s hunger strike and ultimately his death.

The film starts off with Crulic, voiced by Vlad Ivanov, recounting the day his family learned of his death. Although only 33 years-old, he was unrecognizable by his mother and half-sister as the hunger strike had changed his look substantially since they had last saw him. Comparing his life to a bus trip, with many starts and stops, Crulic’s experienced many highs and lows growing up. As an adult, Crulic, a Romanian, made frequent trips to Poland in order to buy cheap goods which he in turn would sell to wealthy Romanians back home. This all changed when Claudiu Crulic was wrongfully arrested for stealing the wallet of a prominent judge in Poland.

Despite being on route to Italy at the time the crime was committed, the fact that Crulic was a suspect in a similar case a few months earlier made him guilty in the eyes of the prosecutions. Firm in his belief that the legal system had failed him, Crulic began a hunger strike from the very first day he was imprisoned. Aside from the strike, Crulic also wrote letters to various consulates pleading his innocence as he begged for the case to be reopened. Unfortunately for Crulic, his letters were either ignored or met with pompous responses. 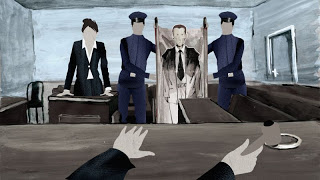 To make matters worse, Crulic had to endure a prison system that did everything it could to try to make him crack and forgo his hunger strike. This included constantly moving him between different prison, and hospital, beds in hopes of creating confusion in his mind as to where he was when the wallet was stolen. Even as Crulic’s health started to deteriorate, the prison hospital refused to take legal action to force feed Crulic or approve a transfer to a hospital more equipped to take care of him.

Anca Damian’s film highlights how both the legal and political system failed Crulic on several levels. However, since the film tries to cover so many different aspects of Crulic’s life, at times it feels like we are only scratching the surface of the key moments. Part of this is due to the way Damian chooses to let the story unfold. While an interesting and important story, Crulic: The Path to Beyond does take a rather straightforward approach. The traditional story telling comes as bit of a surprise considering how daring Damian is when it comes to her animation choices.

Fortunately, all of Damian’s visual choices payoff as Crulic: The Path to Beyond is a beautiful film to behold. She incorporates various animation techniques, and even a hint of live action, to provide context to Crulic’s life over the years. At one point in the film Crulic refers to the fact that his life can be told in one hundred pictures and Damien attempts to do just that. The way she uses real life photos of Crulic, mixed in with the animation, offers up a unique way to document Crulic’s early years. Though the film abandons the photos once Crulic is in prison, Damian manages to keep the film moving at a brisk pace despite the numerous animation styles she plays with over the course of the film.

Crulic: The Path to Beyond may be a film that is standard in its storytelling approach, but that does not make it any less important. Through her wonderful use of animation, Anca Damian is able to give Crulic’s fight for justice new life.

Crulic: The Path to Beyond is screening on Friday October 26th, 9:30 pm at The Revue Cinema (400 Roncesvalles Ave). Tickets can be purchased at the Ekran – Toronto Polish Film Festival website.