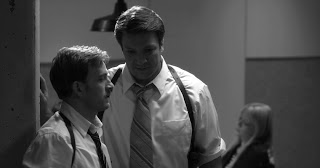 Joss Whedon is having one hell of a year. First his film Cabin in the Woods becomes an instant cult classic, he even converted those who are generally not fans of the horror genre. Whedon then shepherds the summer blockbuster The Avengers to both critical and financial success far greater than anyone expected. So how does he follow-up one of the biggest films of the year? By making a small intimate film that ends up being one of the better contemporary Shakespeare adaptations to hit the screen.

Shot in black and white during a twelve day period, and set entirely in Whedon’s own Santa Monica home, the film plays like an intimate gathering of friends who are all having the time of their lives. Keeping true to the source material, while still incorporating Whedon’s distinctly witty voice, Much Ado About Nothing is a comedy filled with romance and misunderstandings. The story focuses on two couples with distinct views on love. Benedick (Alexis Denisof) and Beatrice (Amy Acker) both openly dismiss the notions of love, marriage, and most importantly, take pleasure in scorning the other. By contrast Claudio (Frank Kranz) and Hero (Jillian Morgese) seem like the perfect couple. They reveal in their love for each other and cannot wait to solidify it through marriage.

As with all Shakespearean comedies, love can never fully be achieved without going through a bit of deceit. In Much Ado About Nothing the lies are used to both bring couples together and tear them apart. Both Benedick and Beatrice are tricked into confessing their feelings for one another. While Claudio is tricked into believing that Hero has been unfaithful. Each couple is forced to take stock of what they hold dear if love is to truly blossom. 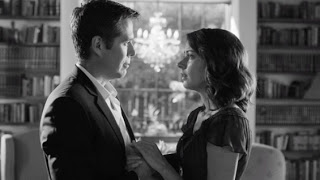 To call Much Ado About Nothing a joy to watch would be an understatement. It is a laugh out loud comedy that skillfully treads the fine line between witty humour and flat out slapstick comedy. However, Whedon ensures that the romance never gets lost in the mix. Although he is a adapting a play that is over 400 years-old, Whedon still manages to make the audience giddy with glee to see Benedick and Beatrice professing their love for each other. Much of this is a result of the enjoyable script.

Whedon keeps most of Shakespeare’s original text in tack while incorporating his own original dialogue and distinct “Whedonisms” into the film. The blend works far better than you can ever imagine. It is Whedon’s attention to the little details that really enhances the comedic timing of the film. In one amusing scene, Benedick and Claudio are arguing the merits of love while standing in a young girl’s bedroom filled with stuffed animals and dolls. As the discussion progress Benedick raves about being single while trying on one of the young girl’s frilly hats. Sly sight gags like this are scattered throughout the film.

Dedicated Joss Whedon fans will be pleased to know that the film features actors from various Whedon productions such as Angel, Firefly, Dollhouse, Buffy the Vampire Slayer, and The Avengers. Fortunately this is not merely a reunion of friends, as the entire cast does a good job of bringing both Shakespeare’s and Whedon’s words to life. It should be noted that Alexis Denisof, Amy Acker and Nathan Fillion are particularly exceptional in their given roles. Denisof and Acker are wonderful as the bickering Benedick and Beatrice. Their comedic timing is impeccable while never losing their romantic chemistry. Fillion gets some great lines as the bumbling Dogberry. He manages to steal several of the scenes in the latter acts.

Much Ado About Nothing is the type of film you wish came out when you were first discovering Shakespeare in school. It displays the brilliance of Shakespeare in a way that is easily digestible for all audiences. This is a film that will not only become a staple in many classrooms for years to comes, but for all those who are interested in seeing a romantic comedy done right.