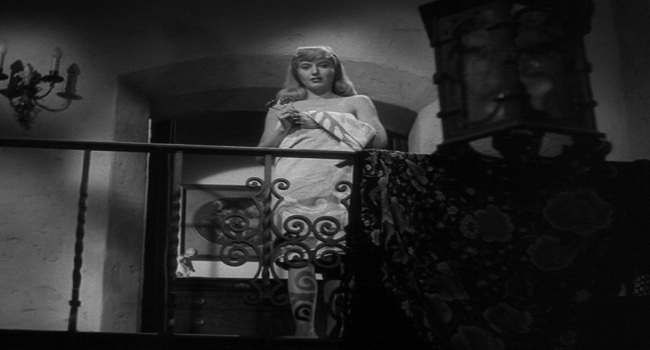 Despite being heralded by many as one of the greatest directors of all time, the majority of the works by director Billy Wilder have shamefully been in my blind spot. My experiences with Wilder have been limited of Sunset Boulevard, Sabrina, Some Like it Hot and The Apartment, but after watching Double Indemnity I am determined to correct this. If you search the internet for lists of the best film noirs of all time, you would be hard pressed to find a list where Double Indemnity was not mentioned in some fashion or another. Having finally caught up with the film, I now understand why the film has received so many accolades. To put it bluntly this is masterful piece of filmmaking.

The film feels like a blueprint for what a film noir should consist of, while still managing to set a standard that few noirs will ever be able to reach. Based on the novel by James M. Cain, Double Indemnity tells the story of a successful insurance salesman, Walter Neff (Fred MacMurray), who falls for a married woman, Phyllis Dietrichson (Barbara Stanwyck), and agrees to help her kill her husband for the insurance money. Mr. Dietrichson’s (Tom Powers) insurance policy features a double indemnity clause which ensures that twice the amount gets paid out if the death is deemed an accident. Although Walter and Phyllis go to great lengths to ensure that the murder is made to look like a train related accident, not everyone is so easily convinced. Walter’s colleague Barton Keyes (Edward G. Robinson), a claims adjuster, and Mr. Dietrichson’s daughter from a previous marriage, Lola (Jean Heather) both question the suspicious nature of his death. As more questions arise, Walter soon begins to wonder if he was a patsy in a much bigger plot.

Wilder wastes no time in divulging key plot points. In fact, this is a rather daring decision when you really think about it. Walter sits at the desk, talking into a recorder, and confesses to a murder. He also he explains that he killed for a woman and proudly makes reference to how he outsmarted Keyes, who the recording is intended for. Since all of this all happens within the first seven minutes, it is easy to assume that there is nothing left to do but watch the events unfold. However, Double Indemnity proves that it has plenty of surprises in store, despite being told in flashback, which is why it can afford to give away what it does at the beginning.

The reason why the film manages to feel fresh today is the way it pays attention to the nuances of each character. You never really know what each individual is thinking about a particular situation. For example, Walter is a man who is all about the little details. Walter has been dreaming of pulling off something like this for years, but never had the opportunity, and when his chance arises he is careful to construct the perfect alibi. However, Walter lives in fear of Keyes, who is the only one smart enough to truly figure it out. Phyllis is the typical femme fatale that you would find in pulp novels but she is wonderful at sizing up individuals rather quickly. It is Walter’s aggressive style of flirtation when they first meet that signals to her that he would be easy to manipulate. Even when thrown into situations that she cannot anticipate, such as when Walter’s boss tries to bully her into a modified settlement, Phyllis’ quick thinking is always on display.

Although the performance by MacMurray, Stanwyck, and Robinson are sensational, it is the screenplay and Wilder’s direction that makes this film truly outstanding. The dialogue in the film is fantastic, things are often said, and left unsaid, in a way that gives insight into a character while not always revealing what they may truly be thinking. There is a wonderful back and forth between Walter and Phyllis upon their first meeting that is just dripping with sexual tension and innuendoes. There are so many great scenes in Double Indemnity, many involving Walter and Keyes, where you can close your eyes and just get swept away in the crackling banter.

The only thing more entertaining than the dialogue is exploring many of the directorial choices that Wilder makes. In the scene where the murder takes place, Wilder frames the camera solely on Phyllis’ face while she drives. Though her husband is being strangled in the seat beside her, she keeps a cool demeanor throughout. The camera only cuts away from her when she gives what appears to be a sly smile. Wilder could have played many of the scenes in this film on a large scale, but opts to embrace the little moments, such as when characters pause to give each other looks that says way more in that moment than words ever could. Double Indemnity is an exceptional film that I will definitely be revisiting on several occasions.