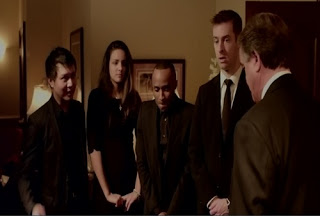 If you have ever worked in an office, then you most likely have had “the card” experience. This is when a card for a specific event, such as wedding, birth of a child, retirement, etc, gets passed around the office for the employees to sign. While it is meant to be a kind gesture, it is often an uncomfortable moment. It is at this point that it becomes clear that you have had very little interaction with the person the card is intended for. This lack of personal connection often results in generic comments on the card like “Best Wishes” or “All the best to you and yours“.

The awkward game of etiquette that occurs in the most workplaces is perfectly captured in the film Loss Together. Directed by Earl Oliveros, this bittersweet comedy focuses on a group of employees who must deal with the death of a co-worker, Joyce, whom none of them really knew. The closest any of them really got to the deceased was being “Facebook friends” despite never actually conversing on the social network site. While this may sound like a grim tale, Oliveros manages to create a satire that consistently hits all the right comedic notes.

One element that makes Loss Together work so well is how it contrasts the emotions of the group with the feelings of the protagonist, Fred (Mark Waters). At first Fred comes off as heartless because he does not show the same emotional response to the news of Joyce’s death as his peers. In one amusing scene his co-workers make Fred watch the opening moments to the Disney film Up, just to see if he will shed a tear. However, it quickly becomes apparent that Fred is actually the most emotionally aware person in the group. Unlike his co-workers, he struggles to exude the same false emotions as his peers. It is only after watching his co-workers go through the motions that we see a change in Fred. He is not so much moved by Joyce’s death as he is angered by his co-workers lack of true response. When Fred encounters Joyce’s parents at the funeral, it really does feel like the first real response that anyone has had up to this point.

In many ways Oliveros’ film holds a mirror up to the unspoken rule of company etiquette. It is a wakeup call that shows how our false reactions are far more evil than our true apathy. Mark Waters does a great job in the lead role, he really sells many of the films’ best comedic lines. Loss Together is an amusing, and somewhat touching, film that captures the false pleasantries of office culture.

Loss Together is playing in Program #2 – Our Zany Adventure at the festival on June 2, 2012. For ticket information, and the full list of films playing the festival, please visit the Toronto Youth Shorts Film Festival website.