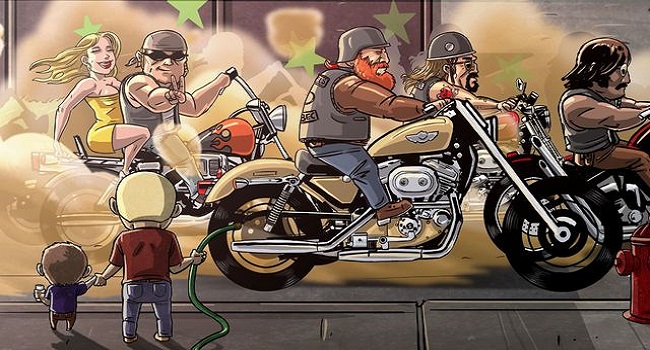 When you were a kid, what did you want to be when you grew up? Some of us wanted to be athletes, some doctors, and some wanted to be fireman. For director Danic Champoux the answer was simple, he wanted to be a member of the Hells Angels. In his film Mom and Me, Champoux reflects back on his youth and the major role the notorious biker gang played in his upbringing.

At an early age Champoux would spend hours staring out the window at the Hell’s Angels bunker across the street from his home in Sorel, Quebec. While the police and media painted the Hell’s Angels as a danger to the community, Champoux saw them as heroes who lived a lifestyle that he found immensely fascinating. Mom and Me not only examines the path in which Champoux’s life takes as a result of his childhood fascination, but also looks at the life of Maurice “Mom” Bouchard as well. A notorious criminal who rises through the Hell’s Angels’ ranks, Bouchard was at one point, one of the most feared individuals in Quebec. Considering that Champoux idolized the Hell’s Angels, it was only a matter of time before Champoux and Bouchard crossed paths.

Mom and Me is a surprisingly entertaining film that does not glorify the Hell’s Angels, but shows how easily an impressionable child could be swayed by the organization. Champoux offers insight into how the Hell’s Angels functioned in Sorel, Quebec. He presents the gang as a community conscious group who were seemingly more effective in deterring crime than the local police. A few of the film’s more humorous moments come when Champoux is getting accounts from former neighbours about what is was like to live on the same street as the gang.

The flaw with Champoux reminiscing about the Hell’s Angels influence on his childhood is that the film feels rather uneven at times. Champoux spends so much time setting up the history of Maurice Bourchard and the Hell’s Angels, that it takes longer than expected for Champoux to really delve into his own story. A good portion of the first half is focussed on Champoux’s childhood obsession with motorcycles and bikers in general. By time the audience is completely engulfed in Champoux’s own experience, the film is near the end. This causes the director to wrap things up in a quick and unsatisfying manner. This is a bit of a shame since Champoux’s life has more than enough twist and turns to carry the film on its own. It is hard not to get caught up in the film when Champoux is detailing his troubled teen years in which he starts to follow Bourchard’s son down the criminal path. These sections, coupled with the director’s relationship with his own father, adds a nice layer to the film.

On the other hand, Champoux’s examination of Bouchard’s life feels more fully realized. In regards to the focus on Bouchard, the interviews that provide the most insight are the ones with journalist, police officers and acquaintances of Bouchard. One segment that does not work as well is when Champoux gets a numerologist to chart Bourchard’s life. These scenes in particular feel more like a gimmick than anything else. Fortunately the film’s fun, and at times raunchy, use of animation more than make up for any of the other pitfalls in the film. The rough style of animation not only fits the subject matter perfectly, but also allows Champoux to provide several unexpected moments. Despite some uneven parts, Mom and Me is a film that offers an entertaining look at both the Hell’s Angels and one boy’s fascination with them.