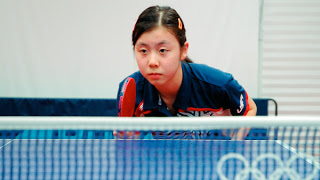 This short documents the life of, then fourteen year-old, American Ariel Hsin who is the youngest female ever to be U.S. Women’s Single Champion in table tennis. Top Spin covers everything from Hsin’s rituals before each match (e.g. eating a particular “lucky” chocolate, placing her hair in a certain way, etc) to the numerous challenges that come with the spotlight. At one point Hsin was practicing up to six hours a day and her right hand is slightly crooked from all the table tennis playing. The vigorous training and constant travel has made it hard for Ariel to have a “normal” childhood. Unlike most sports films, directors Sara Newens and Mina T. Son do not focus their lenses on the actual competition. In fact the footage of Ariel playing competitively is shown in the closing credits. It is nothing more than and afterthought as the film wisely spends its time focusing on the steps that bring Hsin to her current level of achievement. Top Spin is an engaging glimpse into one girl quest to achieve her Olympic dreams and the audience cannot help but cheer her on in the process. 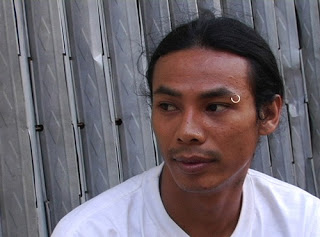 Think about, for a moment, the country with which you identify yourself. The place where you have spent most of your life and the place you would always manage to identify in conversation if someone asked you “where are you from?” Now that you have this image in mind, picture what it would feel like if that country, which you hold dear to your heart, deported you to a foreign land where you could not even speak the language. This scenario may seem like a far fetch concept to you, but it is a horrific reality for many Cambodian-Americans.

In his revealing documentary short Resident Aliens, director Ross Tuttle follows three Cambodian-Americans as they struggle to adapt to a foreign world. Despite considering themselves Americans, Sobil “KK” Tuy, Veasna “China” Sang and Vath “Looney” Tho all find themselves in Cambodia after being deported for committing crimes in America. Years ago America was considered a refuge for Cambodians wishing to escape the civil war and genocide occurring in Cambodia. However in 2002, the United States began deporting hundreds of Cambodian immigrants who held criminal records in the United States. In some cases, like KK, the person served their prison time on American soil and then was immediately deported after their release.

Resident Aliens does not at any point condone the criminal actions of the individuals involved, but does question whether or not the results where unavoidable. Tuttle makes some compelling points regarding how most of the Cambodian immigrants are not given the tools necessary to assimilate smoothly into American life. Most are sent to live in the “hood” where the youth are constantly harassed mentally and physically for being different. This results in many of the Camodian-American youth being swayed by the false security of gang life. Unfortunately the gang life only helps to cement their downward spiral. 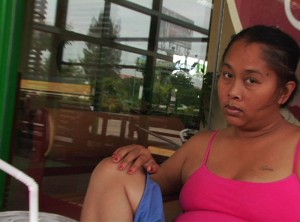 The interesting thing about the deportees, known as “the returnees” in Cambodia, is that they are in what seems to be a perpetual void. Unable to ever return to the United States, they are ostracized from both their home country and the one they are now forced to live in. Many of the local Cambodians view the returnees as criminals and constantly judge them negatively based on how they look. China complains about constantly being swindled by the locals. Although she is one of the few returnees who actual speaks the language, she is constantly dealing with people trying to charge her more for items that locals are paying less for.

Tuttle also documents how the deportation has affected KK, China and Looney in vastly different ways. KK has fought to reinvent himself and teach others to not make the same mistakes. He used his talents in break dancing to set up a program for under privileged youth that not only teaches them dancing techniques, but allows them to also generate income for their struggling families. While KK has tried to make the best of the situation, China and her boyfriend Looney seem resistant to fully accept their new life. China openly admits that she refuse to make friends with anyone who is not Cambodian-American after constantly being mistreated by local Cambodians. Looney struggles with the judgment of peering eyes that are constantly casted on him. Furthermore he seems to be growing more resentful of how much he needs to rely on China’s job and knowledge of the land to survive.

Resident Alien is a documentary short that is effectively leaves the audience with much to think about. Tuttle provides a strong sense of what life is like for many of “the returnees” while subtly questioning whether this is far worst punishment than the time they have already served.