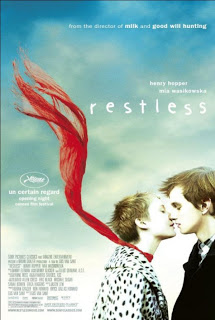 Gus Van Sant is a director who can skilfully create films that appeal to both mainstream and independent cinema lovers. His talents are never in question as he has shown on numerous occasions that he is one the most interesting directors working today. However, this does not mean that he is immune from minor missteps here and there. Take his latest film Restless for example, at first glance it seems like it is a film that Van Sant would knock out the park as it features themes of youth, angst, and love. These are themes that he has maximized to wonderful heights in previous films. Sadly though, Restless somehow manages to miss the mark.

The film centres around two teens, Enoch (Henry Hopper) and Annabel (Mia Wasikowska), who strike up a relationship after meeting at a funeral. Enoch has been kicked out of school and spends his time crashing funerals and making chalk outlines of himself. Beside his aunt (Jane Adams), who he does not get along with, the only other thing in Enoch’s life is Hiroshi (Ryo Kase), the ghost of a Japanese kamikaze pilot. Moody as a result of events that took place in the past, Enoch does not let himself get emotionally attached to anyone. This all changes when he meets the pixieish Annabel. She not only accepts him for who he is, quirky ways and all, but also teaches him how to revel in the living as much as he does the dead. Just as Enoch begins to see future possibilities with Annabel, she reveals to him a secret that will drastically affect the couple’s relationship.

Restless is a film that often feels like two separate films struggling to co-exist. One obvious comparison for the film is Harold and Maude as it has all the quirkiness of that film right down to its moody young protagonist. The second film that Restless feels like at times is Sweet November. As a result there is an unevenness to the whole production that is directly related to the often cliché script. The plot arcs are just too obvious, even the up and down moments of Enoch and Annabel’s relationship feel like a paint-by-numbers production. The character of Enoch in particular becomes rather grating as the film progress. Many of his reveals do not deliver any impact because you know exactly what was coming. More often than not, you are wishing the various reveals would arrive sooner so that the film can get back to focusing on the elements that actually work well…mainly the performances.

Although I enjoyed Wasikowska’s work in The Kids Are All Right, and to a lesser extend Alice in Wonderland, this is the first film that truly made me believe all the hype surrounding her acting abilities. Wasikowska lights up the screen in every scene she is in and helps to keep you interested until the very end. Ryo Kase also delivers a strong performance as Hiroshi, a character that will most likely divide audiences. While it can be argued that there really is no need for Hiroshi in the film, he does offer another layer to Restless that I quite enjoyed. Enoch, despite Hopper’s decent performance, is just not that interesting a character to carry the film on his own. Hiroshi picks up the slack whenever Annabel is not on screen.

Restless is not an awful film by any means, it is just not one that you will remember in a few weeks. The film has several genuinely enjoyable moments, but is bogged down by its formulaic script. In ranking Gus Van Sant’s canon of films, Restless will probably get slotted somewhere in the middle for most cinephiles. It is an average film that never reaches its full potential.