Ken Loach’s Sorry We Missed You uses his familiar social-realist lens to focus on the problem of ‘gig jobs’, a phenomenon that, if the film is anything to go by, is becoming an increasing problem in the UK. Chiefly because, at least as depicted here, its basic concept is being used to take advantage of those desperate for work. An example is an Uber driver, who isn’t a full time or temporary worker, and therefore isn’t afforded what other workers are privy to such as insurance and sick leave benefits from their employer.

At first this doesn’t seem like a big issue that would translate outside the U.K. However, as Sorry We Missed You follows the Turner family, their struggle with debt somehow becomes ours. Their family dynamics and high emotions transcend oceans.

As dryly explained in the opening scene, self-employed delivery driver Ricky (Kris Hitchen) is told that he doesn’t earn wages, he charges fees. He doesn’t have a boss, because he is his own boss! Desperate to shorten the family’s pile of debts, this is music to Ricky’s ears. Needless to say, this far from how things play out for him and his family. In addition to a lack of insurance, there is no official channel to make complaints if he is mistreated on the job. The company hiring workers like Ricky are taking full advantage of their position of power via a legal loophole. 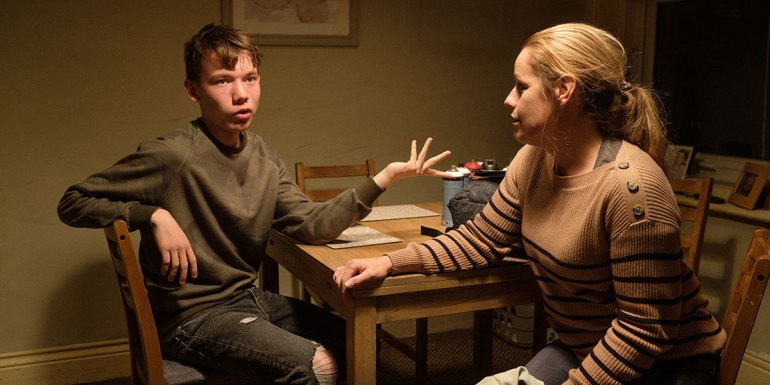 ‘Being your own boss’ often is enough to hook desperate people into the unknown, and despite being told he is working for himself, Ricky’s route as a courier driver comes from the company. Not only that, any days missed are not only frowned upon, no matter the reason, but the employee will lose their ‘fees’ if they don’t turn up to work. The film surely exaggerates these problems, but its social commentary does provide the structure for an emotional story that will resonate with everyone.

Loach has created perhaps his bleakest film to date, as the dry humour of I, Daniel Blake is gone entirely. Through the course of his career as a filmmaker, Loach has assumed the role of key social commentator in the U.K. While this subject matter is not an issue in my part of the world, it’s hard to not become invested in what this family endures and the stories global reach. Given Loach’s talent and tendency to focus almost exclusively on working class characters, it would be interesting to see the famed filmmaker change direction and dive into pure fiction. Regardless, Sorry We Missed You shines an important light on a topic we should all be talking more about.