The Two Popes may revolve around Catholicism, specifically its traditions and beliefs, but the film transcends traditional expectations. Incredibly, its framework manages to avoid any political bias. The airtight script creates a consistent and relaxed tone which allows the chemistry between Anthony Hopkins and Jonathan Pryce – Pope Benedict and Cardinal Jorge Bergoglio respectively – to shine through.

Pope Benedict is a deeply conservative man who has issues with many of the statements and stances Cardinal Jorge Bergoglio has made about the role of the church. Bergoglio’s ideas are far more progressive and his overall desire to remain a cardinal is waning. Slowly over the course of the film though, their disagreements are put aside as a genuine friendship is formed out of their numerous conversations. 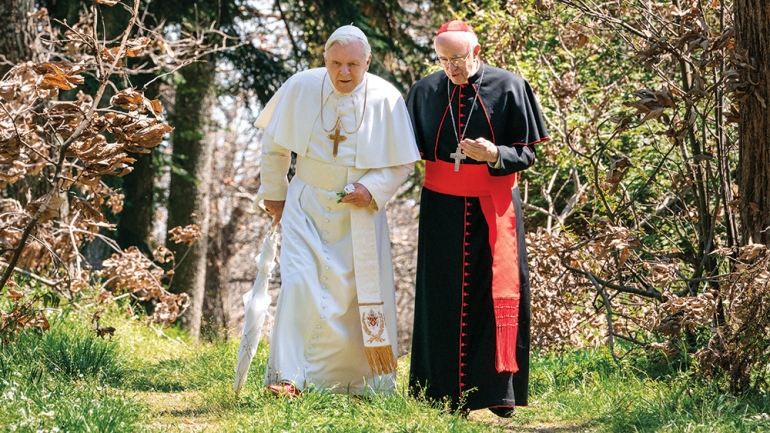 The crux of the narrative involves Pope Benedict resignation from the papacy due to scandals that are unspecified in the film, again it deftly avoids taking a side. When the Pope invites Borgoglio to the Vatican for a second time, the two men slowly become more relaxed in each others company as difficult decisions must be made. Artistic license is used whimsically as the script generates interesting and witty conversations that never ceases to be engaging! There is a surprising amount of understated humour that, while it won’t have you clutching your stomach in laughter, will bring a smile to your face.

The Two Popes is a consistently pleasant movie. While not religious personally, religion and its traditions do fascinate me. While I will never know how close the film is to the truth, it does a great job of creating tension out of many scenes including the process of voting for a new pope.

Hopkins and Pryce are flawless as both display a range of emotions. Their performances are the most convincing acting I have seen all year and I doubt this film would be as successful without them. Director Fernando Meirelles and screenwriter Anthony McCarten have created a brilliant film under the Netflix banner. It is another award worthy film that gives further credibility to the streaming service. Regardless of one’s faith, or lack thereof, The Two Popes‘ story of a friendship blooming from an unlikely place can be enjoyed by anyone.