Octavia Spencer takes a stab at a darker role in the buzzworthy teenage thriller, Ma. The Oscar winner who is best known for playing the sophisticated heroine in films like Hidden Figures and The Help showcases her versatility as unassuming evil-doer, Sue Ann (aka Ma), in her first horror film produced by Blumhouse Productions.

At the beginning of the film, we meet Maggie (Diana Silvers) and her mother, Erica (Juliette Lewis), as they make the move back to Erica’s hometown. It’s a small, rural community, but Maggie quickly acclimates by befriending the popular crowd. During their first hangout session, outside of the local liquor store, the group nominates Maggie to strong-arm one of the patrons into buying them alcohol. A few people decline her advances, but a homely Veterinary Assistant comes along, walking a dog and takes the bait – it’s Sue Ann.

After their first meeting, it’s evident that Sue Ann has ulterior motives and isn’t just being a good samaritan helping the kids out in the midst of their illegal bind. She makes an immediate connection to one of the boys in the group, Andy (Corey Fogelmanis), and beings to regularly purchase alcohol on the group’s behalf and even goes as far as to offer them her basement as a gathering spot. If that wasn’t a good enough reason to disassociate with her, Sue Ann starts to grow even more attached to the group, joining the festivities and aggressively contacting them via social media and text whenever she wants to host a party.

It’s later revealed that Sue Ann attended high school with Andy’s father Ben (Luke Evans) and Maggie’s mother. In a not-so-shocking turn of events, both played a major part in orchestrating a humiliating incident that Sue Ann was the target of. Her sick attachment to Maggie and her friends is a way for her to relive her high school years and seek revenge on those who tortured her through their children. 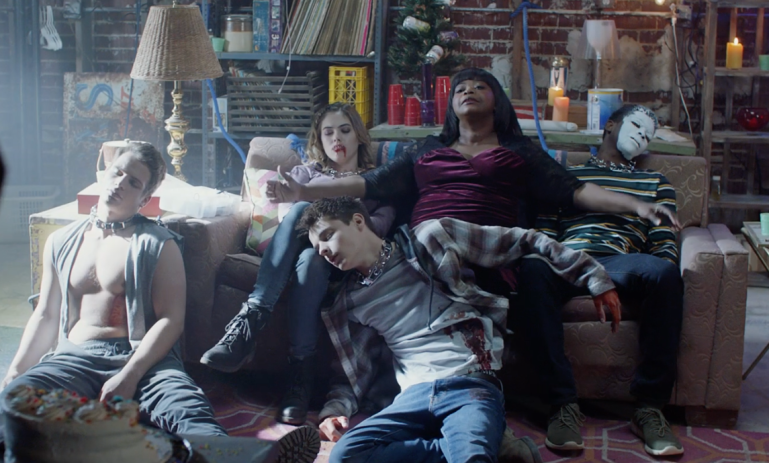 Much like other horror films we’re seeing right now, Ma attempts to throw away an old race-related trope by having a Black woman as its central character – and allowing her to live beyond the first five minutes. However, that’s about all it gets right when it comes to race.

Ma missed opportunities to explore topics of cultural relevance. For starters, there should have been a discussion about what it was like for Sue Ann growing up in a small town where she was mistreated and cast out as an “other.” Tokenism is also rampant throughout the film with Maggie’s group of friends having that one Black friend, Darrell (Dante Brown). Through flashbacks to earlier years, Sue Ann appeared to be a token in what she thought was her inner circle, as well. She touches on this while painting his face white and preparing to kill him, saying that there can only be one of them.

Another sore spot is Sue Ann’s lack of a backstory. She mentally unravels throughout the film and we’re never given all of the pieces of the puzzle to fully understand what made her that way. Outside of the high school trauma, she had a marriage that fell apart and produced a daughter who’s now on the receiving end of Munchausen by proxy. Her high school experience couldn’t have been enough for her to torture her own child, could it?

Despite Ma’s missed beats, it’s fun to watch Spencer hang up her polished persona and dive deep into this psychotic character. Ma certainly won’t win her another Oscar, but I’m eager to see what her next horror project will be.

View all posts by Mischa Jackson