Virus Tropical is a black and white animated film celebrating the coming of age of a young Colombian-Ecuadorian girl in a close-knit family.

Paola’s conception is near-miraculous; her mother had her tubes tied and her pregnancy was initially diagnosed as a tropical virus of some sort. Nine months later, a third daughter was added to the family. Paola’s oldest sister is adoring, and the middle sister is instantly jealous having been so firmly bumped out of the baby position. Paola’s father is a former Catholic priest with many of the religious tendencies still intact, and her mother is a domino-reading fortune teller favoured by the president. It’s a mystical-sounding childhood that in fact turns out to be quite ordinary. 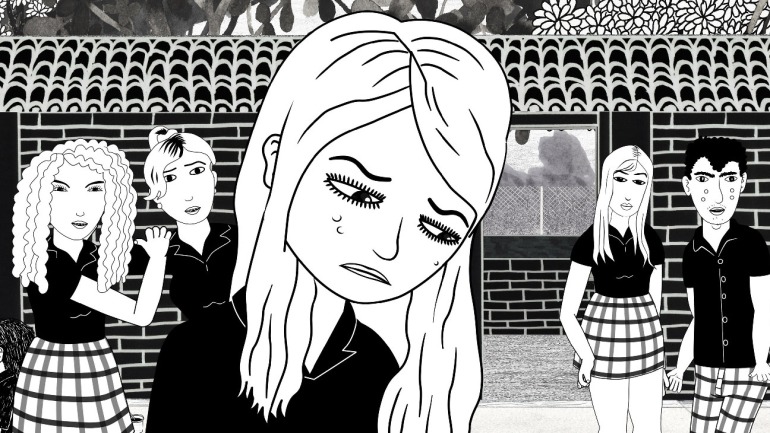 Paola is a kid like any other, struggling to be accepted by her peer group, finding her place among her sisters, rebelling against her parents. The film, based on Paola Gaviria’s (aka Power Paola’s) graphic novel of the same name, belongs in the bosom of the family, and rarely looks out toward larger social or cultural contexts. But even the mundane events are recounted with such attention to detail that they’re fully absorbing, the story rich and brimming with life.

The black and white line drawings are surprisingly effective, and director Santiago Caicedo has a knack for drawing in the eye with relatively simple art. The story itself is rather episodic, and the transitions between them aren’t always smooth, but I was pleasantly surprised by how watchable it felt, and how connected I felt to Paola and her family of strong-willed women. The film doesn’t aspire to make larger connections, so you’ll have to be content with diary-style recounting rather than introspection; Virus Tropical is pleasant and interesting, but it isn’t particularly deep.

View all posts by Jay