There is an amusing meta scene during the end credits of Adam McKay’s Vice where a member of a focus group complains that the film has a liberal bias. The comment sparks another member of the group to defend the film by saying that it is merely stating the facts. As the disagreement escalates to fisticuffs, two women observing the fight talk about their excitement for the next Fast & Furious film.

It is a scene that sums up the film and the audience’s response perfectly.

Vice is not shy about its agenda to paint former Vice President Dick Cheney as a power obsessed monster who was the real puppet master of the George W. Bush administration. As with McKay’s previous work, the Oscar nominated The Big Short, the film wants to educate audiences through humour. However, Vice’s ambition, much like Cheney himself, needed to be reined in.

McKay takes a sprawling, and scattered, look at how Cheney (Christian Bale), with the assistance of his equally opportunistic wife Lynne (Amy Adams), ascended the corporate and political ladder to become the most powerful man in America. Through a narrator named Kurt (Jesse Plemons), who has an intimate knowledge of the inner workings of the man, Vice shows how the seemingly quiet politician was a ruthless shark in every aspect of his life. The film ensures that no moment is missed. Everything from his days as a drunken underachiever to his time with political mentor Donald Rumsfeld (Steve Carell) to his relationship with youngest daughter Mary (Alison Pill), who happens to be gay, is touched on. 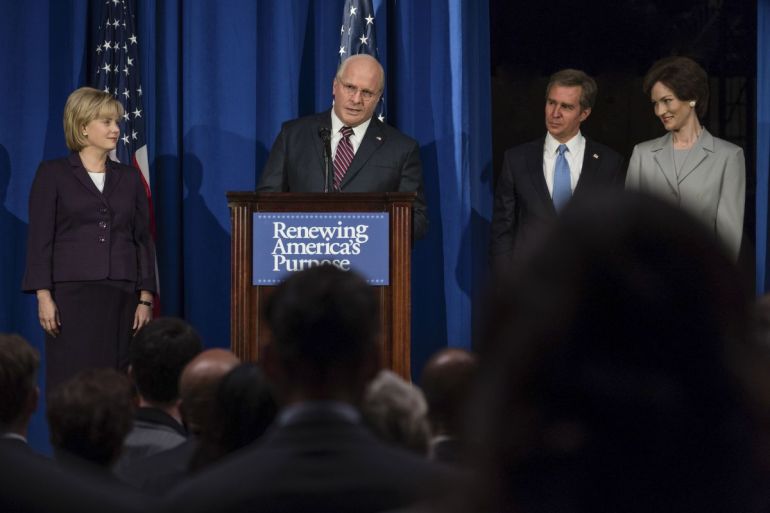 This all makes for a scathing commentary on how the thirst for power corrupted the Republican party long before the Trump administration took office. The film goes to great lengths to draw correlations to today’s political climate, including name dropping many White House officials and key lawyers who have had a hand in several controversial decision of the current administration. Vice especially emphasizes how, much like Trump, Cheney was a staunch believer in the unitary executive theory, which states that the President possesses the power to control the entire executive branch without legal ramifications.

Sprinkled throughout all of this are humorous and strange pop culture references and visual gags designed to make the avalanche of information seem less overwhelming. This includes an amusing fishing metaphor about how Cheney baited a dimwitted George W. Bush (Sam Rockwell) into handing over key Presidential responsibilities before agreeing to sign on as Bush’s running mate.

While McKay’s broad approach, both in his irreverent brand of humour and overall scope, worked wonders when explaining the financial crisis in The Big Short, he does not repeat that same success here. The film’s canvas is simply too large and McKay’s brush strokes are too quick and erratic. Instead of focusing on one specific aspect of Cheney’s life, the film rushes through tons of key moments that would each warrant further cinematic exploration.

Ultimately this makes for a cluttered film that is equally fascinating and frustrating.

Though the erratic nature of the film will test each viewer’s mileage, it is the outstanding performances of Christian Bale and Amy Adams as the Cheneys that are more than worth the price of admission. Each brings a delicate blend of humor and coldness to their characters. They are villains who we are meant to despise, but whose exploits we cannot help but follow.

Bale and Adams are so entertaining that one cannot help but wonder if Vice’s sloppily conceived delivery will ultimately dilute its message. As we saw in the 2016 election, even fact-based mockery has a way of unintentionally turning villains into heroes. Despite its biting moments Vice is too muddled to vote for.