“You have to be brave before you can be good” is the advice that Sam (Kiersey Clemons) receives while on a date with Rose (Sasha Lane) in Brett Haley’s endlessly charming film Hearts Beat Loud. This notion of bravery is something that both Sam and her father Frank (Nick Offerman) are both in desperate need of.

In the case of Frank, a soon-to-be empty-nester, it is finding the courage to let go of everything that has brought him comfort for several years. This means finally giving up on the floundering record store he runs, especially after his landlord Leslie (Toni Collette) had no choice but to raise the rent, and also letting go of his daughter who is in her final summer before going college to study medicine at UCLA. Not quite ready for life without Sam, Frank the gets the idea, after a rather fruitful jam session, that that the pair should form a band.

While Sam, the more practical of the two, has no interest in anything that might derail her education, Frank secretly uploads one of their tracks written by Sam to Spotify and is surprised to see it garner some attention. While Frank clings to his dream of playing in a band with his daughter, Sam’s mother was once in a band with him but passed away 11 years ago, Sam has her own issues to navigate. Her strongest desire is to break free from her life at home in Red Hook, Brooklyn, but she the fact that she is falling in love with Rose complicates things. 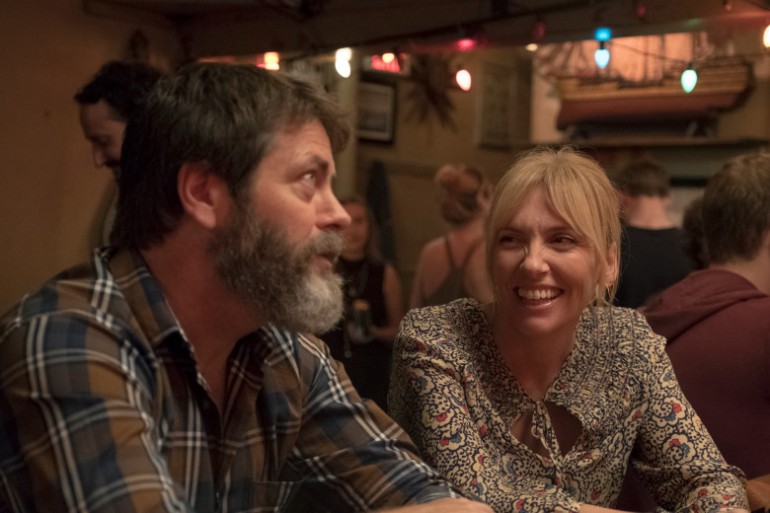 Using music, the original songs by Keegan DeWitt are undeniably catchy, to express many of the things festering in the character’s hearts and minds, Haley constructs a film that is an instant crowd-pleaser. Light in both tone and plot, there is much to relate to within this film. The potentially destructive nature that comes with fear of change is as palpable in the film as the tender moments that ultimately provide the characters with strength.

The overall outcome of the film, especially the choices that Frank and Sam make on the path to growth, is not surprising. However, watching this father and daughter using songs to work through their inner fears is a treat to watch. Both Nick Offerman and Kiersey Clemons, the latter a true breakout here, provide wonderfully nuanced performances. They never become caricatures despite the familiarity of the premise. By time the film showcases some of the songs the pair have been working on, though we get snippets throughout, true catharsis is felt. By the end of Hearts Beats Loud we all feel a little bit braver, as we tap our feet to the beat.