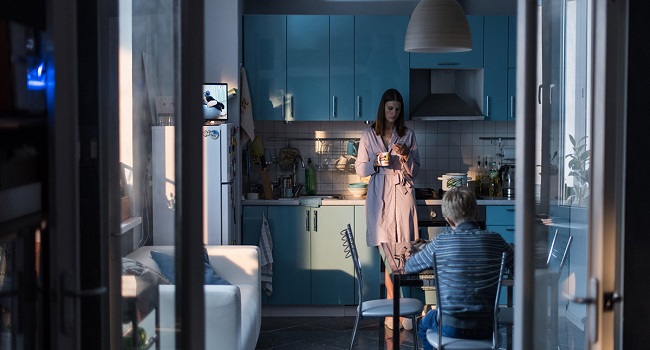 Staying together for the kid is never a good idea. It is equally problematic when you are in the process of a divorce and have no clue what to do with the kid. This is the situation that Boris (Aleksey Rozin) and Zhenya (Maryana Spivak) find themselves in. Their marriage has dissolved to a level so toxic that they can barely spend two minutes in the same room without erupting into an argument. They know the sooner they sell their place the better off they will be, but what to do with their 12-year-old son Alyosha (Matvey Novikov)?

Zhenya does not see the boy as a good fit for the life she is building with her new boyfriend; and Boris does not have room with his girlfriend expecting their first child. The divorce would be so much simpler if Alyosha never existed. Unfortunately, the couple discovers the hard way the consequences of their mutual parental neglect when their son goes missing. As a search mounts for Alyosha, Zhenya and Boris are forced to take an honest look at the choices they have made to bring them to this point.

Taking place during the rising political tensions between Vladimir Putin’s Russia and the Ukraine, Andrey Zvyagintsev’s (Leviathan) latest film Loveless is a powerful and emotionally devastating film. Encased within its gorgeous cinematography is a searing look at two people blinded by their own selfish decisions. Early on Zvyagintsev shows that Alyosha is nothing more than a constant reminder of regret for Zhenya. Boris is no better as he seems more concerned with how the divorce will look to his boss, who is a fundamentalist Christian.

This conflict between old values and modern desires is laced throughout the entire film. It is especially poignant when observing the interactions with both of their new partners, and the blistering scene involving Zhenya’s paranoid mother.

The winner of the Jury Prize at Cannes, Loveless is most emotionally raw when documenting the lengthy search for the missing child. Zvyagintsev’s methodical approach ensures the sense of dread and uncomfortableness lingers long after the film ends. Incorporating subtle commentaries on politics, our obsession with social media and religious hypocrisy, Loveless is a weighty drama that packs one powerful emotional punch.

This review was originally posted as part of 2017 TIFF coverage. Loveless opens today at the TIFF Bell Lightbox