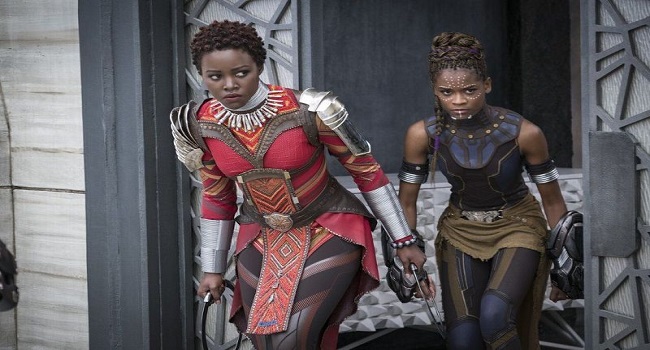 To call Black Panther a remarkable piece of filmmaking would be an understatement. It is unlike any other blockbuster, superhero or otherwise, to ever hit the big screen. Ryan Coogler’s film is filled with memorable action set pieces, steeped in African culture, and is unflinching in its commentary about the devastating reverberations of colonialism on black communities in America and across the globe.

It achieves all of this while playing within several of Marvel’s beloved tropes. The most notable one being the way the sins of the father causes conflict for central hero.

Set within the Afrofuturistic nation of Wakanda, an isolated land with advance technology, the film picks up after the events of Captain America: Civil War. T’Challa (Chadwick Boseman) has assumed the role of King of Wakanda and continue as Black Panther, the official protector of the nation. Before he even has time to adjust, an old foe Ulysses Klaue (Andy Serkis), one of the few outsiders to set foot inside Wakanda, resurfaces to continue his quest to rob the nation of its powerful resource known as vibranium.

In his pursuit of Klaue overseas, T’Challa crosses path with C.I.A. agent Everett K. Ross (Martin Freeman), who is also trying to bring Klaue to justice, and the mysterious Erik Killmonger (Michael B. Jordan), a former Special Forces soldier determined to find Wakanda at all cost. Discovering that Killmonger is the son of his deceased uncle, T’Challa has no choice but to allow Killmonger his birthright to challenge for the throne. A decision that could potentially throw the nation and the world at large into chaos.

Much press has been written about Black Panther’s importance in terms of representation. It is one of the few blockbusters that, in a long time, presents black men and women as heroes, skilled scientist (Letitia Wright’s Shuri), fierce warriors (Danai Gurira’ Okoye and Winston Duke’s M’Baku), politicians (Daniel Kaluuya’s W’Kabi), skilled international spies (Lupita Nyong’o’s Nakia), and individuals who can maintain a thriving economic system. However, what also needs to be praised is how the film navigates the complexities of the black experience to craft one of the most compelling villains to ever grace the Marvel Cinematic Universe.

Unlike many of his villainous contemporaries, Erik Killmonger is not out to take over the world, but to reshape it. His motives are driven by the centuries of injustice towards his people; and the fact that countries like Wakanda, which had the weapons to liberate those who are oppressed, have silently watched the atrocities from the sidelines.

Killmonger sees empowerment and true freedom as something that can only be achieved through terror and force. He believes that reparations do not come through equality and apologies, but by providing weapons to those whose ancestors were placed in chains, and whose descendants have suffered for years under dense systemic racism. He is the embodiment of the negro uprising that some have feared since the days of slavery.

Of course, one cannot help but question whether such actions truly make Killmonger any different than the people he rages against. This philosophical approach is also a direct contrast to T’Challa’s upbringing and ideologies. Which ultimately forces the newly crowned king, and the audience for that matter, to contemplate the darker side of history and what are the responsibilities of wealthy nations when it comes to global humanities.

While other Marvel films have flirted with incorporating real world issues in the past, Black Panther is the first to do it so overtly. The film entertains and empowers through its representation while simultaneously acknowledging the levels of complexity that comes with history and race. The most well-rounded and thought-provoking MCU film to date, Black Panther reigns supreme in every possible way.