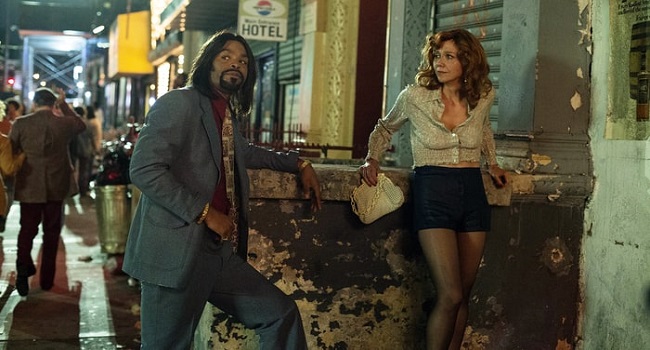 The latest series from creator David Simon (The Wire, Treme, Homicide: Life of the Street) is a sprawling look at the sex trade in Time Square, New York City during the early 1970s. The Deuce, whose first season arrives on Blu-ray this week courtesy of HBO Home Entertainment, examines the ways in which pornography, prostitution, and corruption (both by the law enforcement and the mafia) were tightly woven into the fabric of the city.

The central arcs revolve around twin brothers Vincent and Frankie (both played by James Franco, he also serves as an executive producer on the show), who find themselves in bed with the mob when old gambling debts need settling; and Candy (Maggie Gyllenhaal, who is also a producer on the show), a sex worker who sees the emerging porn industry as a way off the streets. Over the course of the season we also meet the pimps (Gbenga Akinnagbe, Gary Carr, Clifford “Method Man” Smith and Tariq Trotter), police officers (Lawrence Gilliard Jr., Don Harvey), mobsters (Michael Rispoli) and a journalist (Natalie Paul) who are either exploiting the sex trade or trying expose the corruption within it.

As with most of Simon’s works, it takes The Deuce a couple of episodes to find its groove. The first three episodes spend a lot of time establishing the large cast of characters and their roles within this world. However, once things get going, it becomes increasingly apparent that Vincent and Frankie’s storylines are the least interesting aspect of the show. Their familial saga and the increasing amount of businesses they operate for the mob – their brother-in-law Bobby (Chris Bauer, one of several former The Wire actors who appears here) who ends up running a rub and tug style massage parlor- are key to linking the various narratives together, but it is the sex workers themselves who are the true heart of the show.

The Blu-ray comes with several commentaries that provide further insight into the thought process behind a given episode. The featurettes that are well worth your time though are “The Wild West: New York in the Early ‘70s” and “The Deuce in Focus.” The former touches on the era that inspired the show and the importance of having many female writers on staff to ensure that the female characters where presented in an authentic way. The latter feature looks more at the directorial side of things as the likes of Michelle Maclaren, James Franco (who directs two episode) and more discuss the visual aesthetics for the show.

While it takes several episodes to get off the ground, The Deuce will have you hooked into its web of corruption by the time you reach the end of the first season.

Bonus Features:
Inside the Episodes
The Deuce in Focus
The Wild West: New York in the Early ‘70s
Audio Commentaries