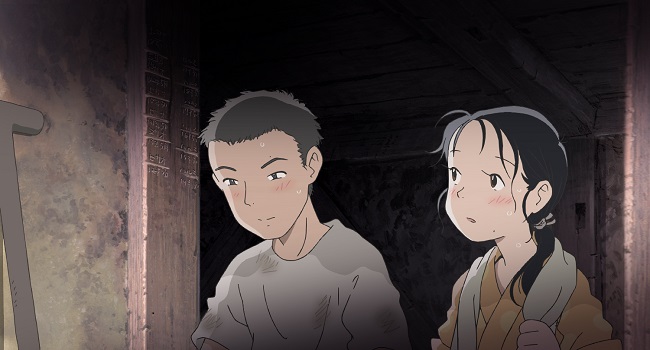 It is common for films recounting the turbulent nature of World War II, especially the bombing of Hiroshima, to focus on the devastation. The horrors of war is something that audiences still find disturbing and fascinating with equal measure. This is why Sunao Katabuchi’s In this Corner of the World is such an intriguing work. While the impact of war is prevalent and heartbreaking, the film is more concerned with the resilience of life itself.

Released on a Blu-ray/DVD/Digital Download combo pack courtesy of Shout! Factory, In this Corner of the World is a delicate portrait of a young woman whose coming-of-age occurs during World War II. Suzu, a young girl from Hiroshima, moves to the nearby city of Kure, which is home to a large naval port, after marrying Shūsaku at age 18. Learning to adapt to life with a husband she hardly knows and his family, Suzu’s life is further complicated by a city wide food shortage and frequent air raids by U.S. bombers.

Spanning numerous years, before and after the bombing of Hiroshima, Katabuchi’s film uses Suzu’s love of art to capture the beauty and sadness of a land being reshaped by conflict. The film effectively conveys the sense of innocence within Suzu, and others, leading up to the war. Katabuchi slowly, and skillfully, diminishes this glow with each passing year. This allows the impact of the poverty and fear that war fosters to creep up like a shadow on the people of Kure and Hiroshima.

As graceful and meditative as Katbuchi’s work is in the film, there is an abruptness to several of the scenes. This presents a bit of a scattered feel to some of the more mundane moments of life that In this Corner of the World captures. Thankfully this does not diminish the weight of emotion flowing throughout the film. The Blu-ray/DVD/Digital Download combo pack offers several extras that provide additional context to this particular chapter of Japan’s history. The most fascinating one is the “Hiroshima & Kure: Then & Now” feature which compares changes, both past and present, for the real-life locations featured in the film.

In this Corner of the World serves as an elegant reminder of the resilience of humanity even in the darkest times.