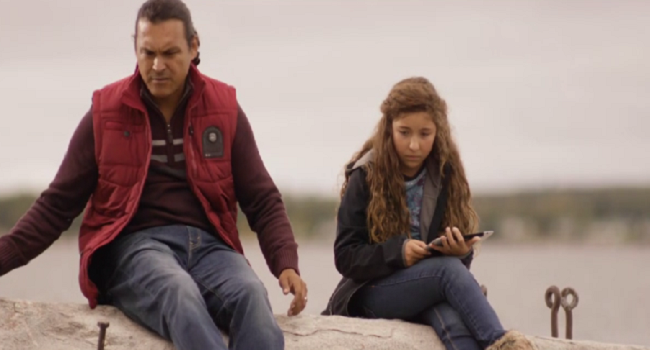 Director Jeremy Torrie’s Juliana & The Medicine Fish adapts the popular Young Adult novel by Jake MacDonald, with both men co-writing the adaptation. The film tells the story of young Juliana over a summer at her father’s fishing lodge following the death of her mother. The two do not have the best relationship to begin with, as Juliana’s father is distant, irresponsible, and a bit of a drinker.

The main thrust of the film involves a fishing tournament that the lodge is hosting. There is a small purse for the team that catches the biggest fish and the most fish, and a special $1 million prize if anyone in the tournament catches a world record fish. With Juliana’s family in financial trouble, it doesn’t take much imagination to predict where this is going.

And that’s the major failing of the film. Everything is terribly over-simplified, over-acted, and over-explained. The result is a movie that is both as simplistic as imaginable and manages to be stuffed with plot. It’s both slow and busy, a strange mix that feels overly tiresome.

The performances do not help. The acting has an amateur quality to it, but it isn’t completely terrible. Mostly, I feel it suffers from the same poor direction as the film. Lines are delivered without any subtlety, an avalanche of matter-of-fact bromides that immediately take the spectator out of any scene.

Even the editing feels lackluster and bland. Cuts are quick, with very little artistry or concern with the flow of the visuals. Some truly beautiful nature shots are wasted by the editing in this film. There’s no patience, no feeling for telling a story through visuals.

Juliana & the Medicine Fish may have doomed from the start given its clichéd story, but the filmmaking doesn’t do any favors for this ill-fated adaptation.

I am a molecular biologist who loves movies and wants to think about them and discuss them from the perspective of romantic realism, a reason-based school of aesthetics championed by novelist-philosopher Ayn Rand. View all posts by Derek Jacobs