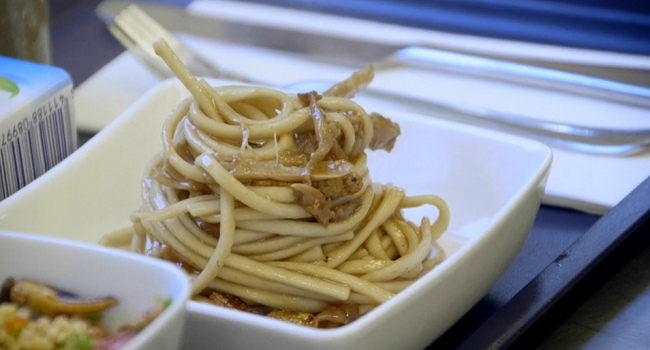 Imagine going to your favourite restaurant and ordering a dung beetle stew just as easily as you can order a gourmet hamburger. While the notion may seem far fetched to some, Andreas Johnsen’s latest film Bugs makes a convincing argument for insect infused culinary dishes.

Embarking on a “gastronomic adventure” with Josh Evans and Ben Reade, a researcher and chef respectively at Nordic Labs, a non-profit organization that investigates food diversity and deliciousness, Johnsen’s film aims to change our misconception about bugs in more ways than one. According to the United Nation’s Food and Agriculture Organization, there will be an estimated 9 billion people on earth by 2050. To supplement the necessary increase in food production, insects will be a crucial source for people’s diets.

While North American sensibilities would naturally assume that this alternative source of protein is beneficial specifically to third world countries, Evans and Reade repeatedly shoot down this notion. They firmly believe that bugs are not meant to be viewed as the cure for world hunger, but rather as a tasty, and culturally tailored, addition to each person’s daily menu.

Using sushi as a perfect example for their vision, as the notion of eating raw fish disgusted many in America as recently as the 90’s, but now can be found in almost every grocery store, Evans and Reade are constantly searching for innovated ways to incorporate bugs into edible items.

Considering that there are over 1900 edible insects identified in the world, there is no shortage of innovated ideas for the men to play with. One minute they are traveling the globe hunting and cooking up insects in the Australian outback, the next they are at the Nordic Labs in Denmark crafting experimental bug infused food for airlines.

Keeping his tale confined to a compact 73-minute running time, Johnsen’s film maintains a light tone while never feeling overly preachy. Though Bugs takes a pro-insect meal stance, Evans and Reade are astutely aware of some the roadblocks at play.

One such hurdle is getting the insect inspired dishes to the masses. Aside from current food regulations that do not deem many insects as legal food, there is the capitalist side of the food industry that concerns Reade greatly. It would not take much for a handful of corporations to swoop in and monopolize the insect industry. Thus making many of the bug infused dishes an elitist delicacy.

A solid edition to the foodie genre, while providing plenty of food for thought, Bugs is a film viewers can sink their teeth into.