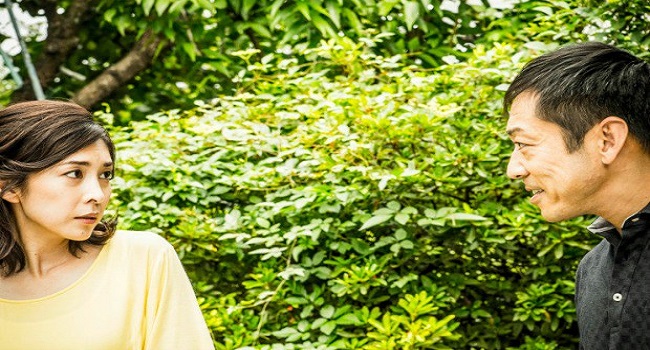 Securing his place in Japanese horror history with Pulse and Cure, Kiyoshi Kurosawa takes us to the next level of uneasiness in his psychological horror Creepy.

Takakura (Hidetoshi Nishijima) is a detective turned criminal psychology professor after the trauma of his last encounter with a criminal left him injured. His quieter lifestyle brings him to a new neighbourhood with his wife Yasuko (Yuko Takeuchi) and goofy dog Max. He has a stand-offish neighbour that brushes them off immediately when they visit to introduce themselves; and another who is a bit of an oddball. Takakura soon finds the academic life to be a little boring and, seeing a colleague research murder sites in the surrounding area, becomes interested in one unsolved case regarding missing family. They disappeared six years ago, leaving their daughter behind. This peaks Takakura’s interest, and before you know it, he is helping his colleague dig up information despite his initial misgivings. Little does Takakura know that this investigating will take on a winding road of weirdness, mystery and bizarre connections.

Adapted from a novel written by Yutaka Maekawa, Creepy is an insidious story in the purest form. The words “creepy” and “weird” get used a fair amount, for obvious reasons. From the literal creeping camera work, slowly gliding up to the actors in a claustrophobic manner to voyeuristic and static angles that make one think of CCTV, we see the action ooze into the intricate nooks and crannies of the plot.

This allows the overly trusting characters, who initially seem to make annoying and arrogant decisions, to actually create the type of tantalizingly anxious moments that missing from a lot of horror these days. Hats off to Teruyuki Kagawa who plays the oddball neighbour Nishino, his intensity and abrupt personality changes guide those character decisions in a fascinating and perplexing way. Overall, the feel of Creepy makes the “spidey” senses kick into overdrive, and this is one story that will make you want to shout at the characters onscreen, even when they go with their gut.

Predictability seemed to be a plot device used by Kiyoshi Kurosawa to throw the audience off. That paired with the slow moving action effectively creates great cringe inducing tension. It’s a long haul at 2 hours and 10 minutes, but it’s chock-full of information, reveals and ruses to build an incredible sense of uneasiness. True to his style Kurosawa also manages to examine and turn traditional familial roles on their head, almost mocking them as he picks them apart in a psychological shakedown.

With trust, assumptions and gut feelings taking center stage under an uncomfortable microscope, Creepy definitely lives up to its name.

Tickets can be purchased at the Toronto After Dark website.