The Toronto After Dark: Horror, Sci-Fi, Action and Cult Film Festival has unveiled its exciting 2015 lineup. Once again compiling an exciting array of feature films and a fantastic collection of shorts, the festival is gearing up to offer audiences tons of thrills and chills this Halloween season. The 10th annual edition of the festival will include the Irish creature feature Sundance hit THE HALLOW, the horror-romance NINA FOREVER, the World Premiere of THE HEXECUTIONERS, and BACKTRACK starring Oscar-winner Adrien Brody as a psychotherapist tormented by spirits of the dead. Running from October 15-23, at the Scotiabank Theatre, be sure to get your tickets before they sell out. 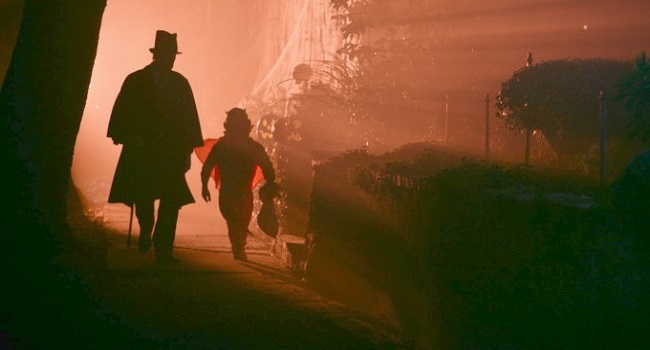 THE HALLOW (Ireland) Toronto Premiere
Possibly the scariest film in this year’s Toronto After Dark lineup, THE HALLOW from the producers of LET US PREY terrified audiences at Sundance on its debut. After a young family move from the big city to a peaceful Irish woodland cottage, their dismissive attitude to folklore legends angers the local townspeople. It’s not long before the family members find themselves in a desperate fight for survival in a prolonged confrontation with some vicious creatures lurking in the forest.

THE HEXECUTIONERS (Canada) World Premiere
Directed by Jesse Thomas Cook (MONSTER BRAWL) from a screenplay by acclaimed writer Tony Burgess (PONTYPOOL) THE HEXECUTIONERS is a chilling new rural horror thriller with shades of cult classic shocker THE WICKER MAN. Two young nurses who specialize in treating the terminally ill are summoned to stay at an isolated mansion deep in the countryside. On their arrival, they encounter a series or bizarre and sinister characters including a hideously deformed old man with a terrifying dark past. 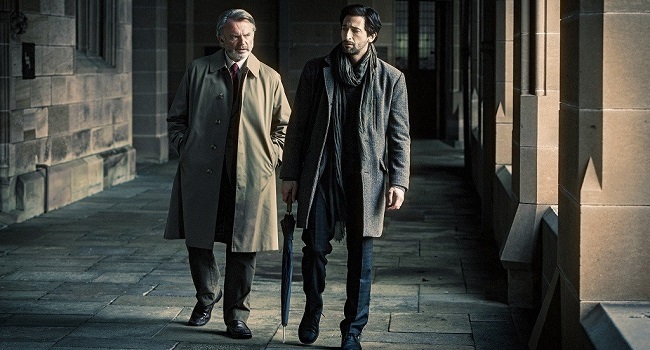 BACKTRACK (Australia) Canadian Premiere
Oscar Winner Adrien Brody and the iconic Sam Neill (JURASSIC PARK) deliver polished performances in this creepy supernatural horror thriller that haunted audiences at this year’s Tribeca Film Festival. After a series of unnerving ghostly encounters in the city, a troubled psychotherapist returns to his rural home town to try and solve the dark mysteries that date back to his childhood.

THE DIABOLICAL (USA) Canadian Premiere
Single mom Madison (HEROES’ Ali Larter) and her two children are awoken nightly by strange and terrifying apparitions in this supernatural thriller from the producers of THE PACT that unnerved audiences at SXSW. Seeking help from her scientist boyfriend, they embark on a hunt to destroy the violent spirit that paranormal experts are too scared to take on.

GRIDLOCKED (Canada) Canadian Premiere
DIE HARD meets ASSAULT ON PRECINCT 13 in GRIDLOCKED, a crowd-pleasing throwback to fan favourite action movies. A group of deadly mercenaries led by Stephen Lang (AVATAR) attack a police facility with a sinister ulterior motive. It’s up to a hardened officer (PRISON BREAK’s Dominic Purcell) and his sidekicks that include Danny Glover (LETHAL WEAPON) and WWE star Trish Stratus to repulse the invaders using every weapon they can lay their hands on.

SHUT IN (USA) Canadian Premiere
PANIC ROOM meets YOU’RE NEXT in this gripping home invasion horror-thriller, full of shocks and surprises, from the executive producer of INSIDIOUS. After three criminals, including fan favourite Martin Starr (DEAD SNOW 2) break into a supposedly empty house, they find themselves in a deadly game of cat and mouse with the occupant, a shy young woman with a few nasty tricks of her own to play on the invaders.

NIGHT OF THE LIVING DEB (USA) Canadian Premiere
In this crowd-pleasing zombie comedy in the mould of SHAUN OF THE DEAD, the sleepy New England town of Portland, Maine awakens to an apocalypse of the undead kind. It’s left to awkward local girl Deb, Ryan a guy she’s just had an embarrassing one night stand with, and his eccentric dad played by fan favourite character actor Ray Wise (TWIN PEAKS) to band together to figure out how to defeat the blood-thirsty horde!

THE INTERIOR (Canada) Toronto Premiere
A unique blend of dark comedy and creepy horror, THE INTERIOR scored rave reviews on its debut earlier this year at the Fantasia Film Festival. Tired of the corporate life, a frustrated young office worker quits his day job and flees the city to go on a camping trip by himself, deep into the forest. His sense of tranquility is replaced by fear when it becomes clear that someone sinister is also out there, lurking in the woods. 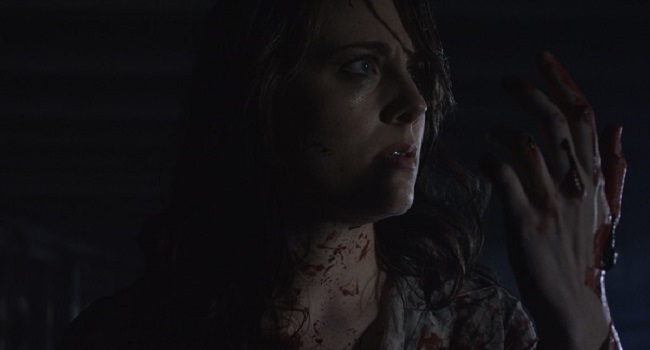 THE HOLLOW ONE (USA) International Premiere
In this sinister supernatural horror-thriller, with nods to cult classic HELLRAISER, a discovered artifact unleashes a demonic force upon the people of a small farm town. With most of the townspeople turned into possessed minions, two young sisters find themselves in a race against time to try and stop the sinister force before its evil purpose is achieved. 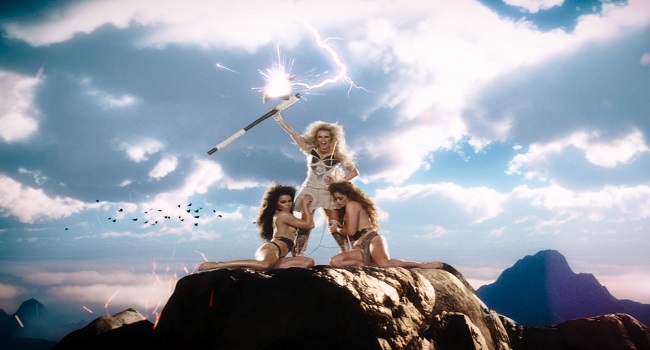 DEATHGASM (New Zealand) Toronto Premiere & Closing Gala Film
In the latest crowd-pleasing horror-comedy from New Zealand that’s taken the festival circuit by storm since its debut at SXSW, a group of metalhead outcasts unwittingly unleash a horde of vicious demons upon their sleepy suburban neighbourhood. Now they’ll have to engage in an epic duel of blood and metal with Satan’s hordes if they’re to win back their town. 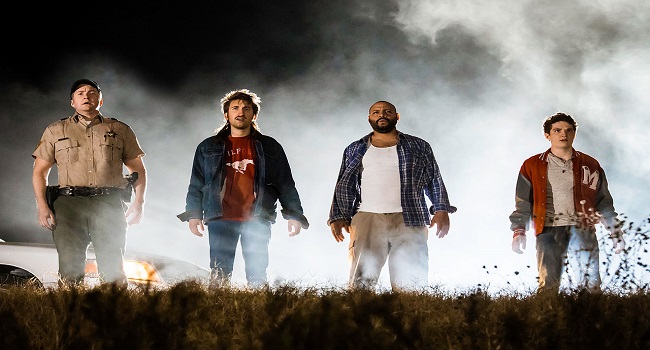 LAZER TEAM (USA) Canadian Premiere
Web series gods Rooster Teeth (RED VS BLUE) hit it out of the park with their feature debut LAZER TEAM, a crowd-pleasing sci-fi action comedy. When Earth is threatened by an advanced alien race, the planet’s only hope lies in four morons, the self-proclaimed “Lazer Team” and some high tech weaponry that’s never been tested before!

A CHRISTMAS HORROR STORY (Canada) Toronto Premiere
A delightfully creepy, Yule-themed horror tale from the same talented team behind the GINGER SNAPS movies. Living icon William Shatner stars as local radio DJ Dan working the Christmas Eve graveyard shift, when all hell breaks loose around him in the snow-covered town of Bailey Downs. Santa’s having the most terrible night of them all, having to fight off an outbreak of zombie elves heralding the arrival of his evil nemesis, the monstrous Krampus! 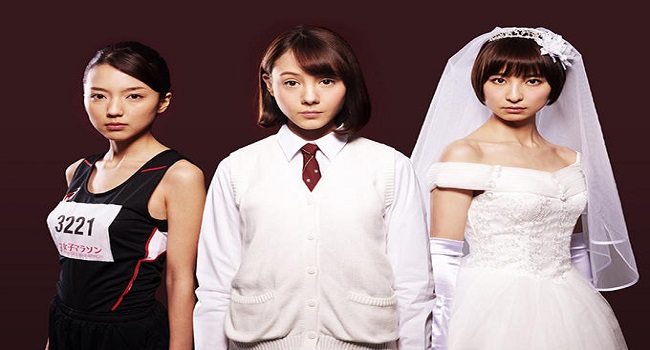 TAG (Japan) Toronto Premiere
From the warped mind of acclaimed Japanese director Sion Sono (SUICIDE CLUB, LOVE EXPOSURE, WHY DON’T YOU PLAY IN HELL) comes a shocking, satirical, horror-action-thriller about three Japanese schoolgirls in the race of their lives as they try to outrun a mysterious malevolent force that’s brutally killing every girl around them.

LOVE & PEACE (Japan) Toronto Premiere
A wildly imaginative Japanese fantasy/monster movie mashup about a down-trodden office worker who aspires to be a rock star and his pet turtle who wants to grow up to be a giant city-destroying creature like Godzilla! Don’t miss this one-of-a-kind cinematic delight from the eccentric mind of director Sion Sono (SUICIDE CLUB, LOVE EXPOSURE, WHY DON’T YOU PLAY IN HELL) that’s rightfully winning Audience Awards! 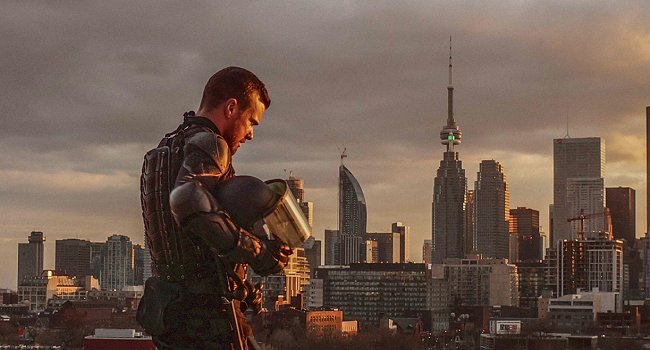 THE DEMOLISHER (Canada) Toronto Premiere
A hypnotic, dark, award-winning thriller about a mentally unstable vigilante, The Demolisher, who deals with his personal frustrations by donning a suit of body armour and prowling the streets at night, delivering brutal justice to those he feels deserve it. The film’s atmospheric nocturnal city landscape is superbly enhanced by a fantastic synth score from Glen Nicholls aka Future Funk Squad! 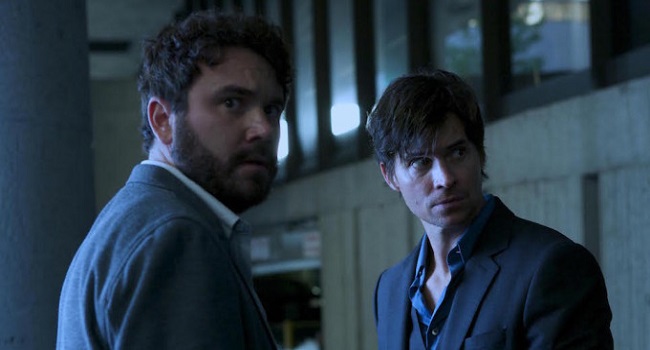 SYNCHRONICITY (USA) Toronto Premiere
From Jacob Gentry (Sundance hit THE SIGNAL) comes another smart, dark, sci-fi thriller, this time heavily influenced by the noir ambiance of BLADE RUNNER. A brilliant young scientist tries to crack the secret of time travel whilst thwarting the advances of a sinister corporate leader (portrayed by fan fave villain Michael Ironside), while falling for a mysterious woman whose suddenly appeared in his life.

PATCHWORK (USA) International Premiere
A delightfully dark, Frankenstein-themed horror comedy about a re-animated corpse, made from the stitched together body parts of three murdered young women, that decides to go on a bloody quest to find their killer and avenge their deaths! 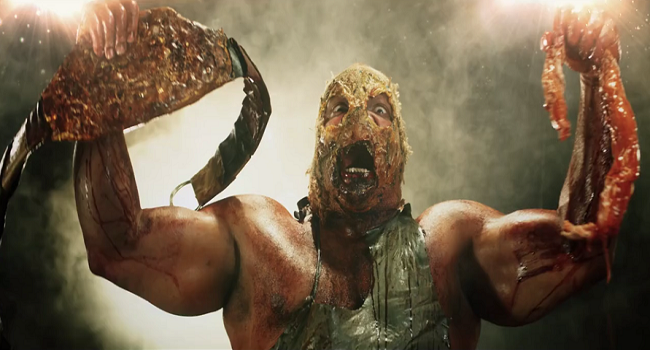 CANADA AFTER DARK: 19 outstanding Canadian short films will screen at this year’s festival. And as per tradition at Toronto After Dark, one in front of each of the Feature Films: CHASING DEATH, DEAD AIR, EL GIGANTE, F**K BUDDIES, FROM OUT, HEIR, HOME SWEET HOME, I AM COMING TO PARIS TO KILL YOU, IBOP (INTERNATIONAL BROTHERHOOD OF PANCAKES), LET ME DOWN EASY, NIHIL, O NEGATIVE, OUT OF THE MOLD, POINT OF VIEW, PORTAL TO HELL, SLEEP MONSTER, THE CHAMP, THE ORCHARD, THIS HOME IS NOT EMPTY

Tickets for Toronto After Dark screenings are available at the festival website, Cineplex website, the Cineplex app and in person at the venue priced at $13 each (or $11 if buying in a multipack online).