As Michael Mann’s Blackhat made its premiere this past weekend, TIFF looks back at the big-screen oeuvre of the crime-film auteur, which brought a grit and elegance to action cinema that has influenced nearly every police-procedural show on North American television, as well as successive waves of crime thrillers from Hong Kong and Korea.

Drawing on the influence of such male-centred directors as Sam Fuller, Sam Peckinpah and Stanley Kubrick, Mann’s tough-guy cinema offers a master class on masculinity — its nature and definition, in action and appearance. Mann explored his vision of manhood in a variety of different milieus and genres. Furthermore, his relentless pursuit of realism — whether telling the stories of real historical figures in The Insider, Ali and Public Enemies, recreating eighteenth-century frontier America in The Last of the Mohicans, or bringing a remarkable sense of verisimilitude to the crime fictions of Collateral and Miami Vice — has become as much a defining element of his style as the visual gloss of his rain-slicked neon nights, the pulsing beat of his musical scores, and his masterfully staged action set pieces.

Neon Nights: The Films of Michael Mann runs from February 5 to March 26 at TIFF Bell Lightbox. 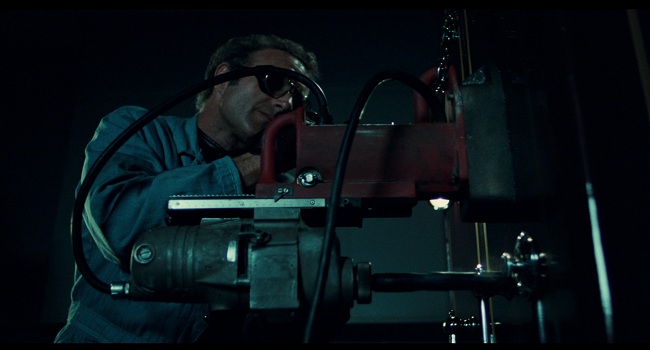 Thief
USA 1981 | 124 min. | R
Looking to make one last big score and then get out of the game, safecracker Frank (James Caan) agrees to work for an avuncular mobster (Robert Prosky) offering a big payday for a high-profile job. Things don’t go as planned, and the lone wolf soon finds himself a hunted animal. As fully formed a debut as any in film history, Thief instantly established Mann’s cinematic hallmarks: his meticulous attention to detail, stylishly rendered visual and sonic environments (in the blue-tinted, rain-slick neon nights and pulsing electronic score by Tangerine Dream), expert action sequences, and hard but noble men displaying the utmost grace under pressure. Caan gives one of his defining screen performances as Frank, while Tuesday Weld is woundingly affecting as the woman he’s willing to give it all up for; the scene in a diner where they negotiate the terms of their relationship and the possibilities of their future together in the blunt terms of the underworld is a prototypical example of the filmmaker’s grittily realistic and wistfully romantic vision.
“One of the most intelligent thrillers I’ve seen.” (Roger Ebert)
February 5 & March 10

Manhunter
USA 1986 | 119 min. | R 35mm Archival Print!
Expert criminal profiler Will Graham (William L. Petersen) is called back from early retirement to help the FBI track down a serial killer dubbed “the Tooth Fairy.” Seeking insight into the killer’s mind, Graham consults the brilliant but deranged Dr. Hannibal Lektor (Brian Cox), whose apprehension nearly cost Graham his life — and his sanity. Blending high style with painstaking proceduralism, Mann’s adaptation of Thomas Harris’ novel Red Dragon established a narrative and visual template that would influence scores of contemporary TV crime dramas, from the Petersen-starring CSI to True Detective. The sinister realism that Brian Cox brings to his Lektor — as well as Tom Noonan’s intimidating physicality as the Tooth Fairy — set a new precedent for the serial-killer figure in contemporary pop culture, elevating it from slasher-film boogeyman to psychological enigma. 35mm print courtesy of UCLA Film & Television Archive.
“Manhunter ushered in the age of empathy for the devil.” (David Edelstein, Slate)
“One of the most impressive American thrillers of the late ’80s.” (Geoff Andrew, Time Out London)
February 6 & March 5

The Last of the Mohicans
USA 1992 | 114 min. | PG Director’s Cut!
Mann’s first movie memory was of the 1936 Randolph Scott film of The Last of the Mohicans, and his version of the musty tale accordingly owes far more to that previous cinematic incarnation than the original James Fenimore Cooper novel, which even in its own time was derided for its lack of authenticity. During the Seven Years’ War, noble warrior Hawkeye (Daniel Day-Lewis) works as a scout for the British along with his adoptive father Chingachgook (Russell Means) and brother Uncas (Eric Schweig). Rescuing and romancing a general’s daughter (Madeleine Stowe), Hawkeye soon finds himself at the centre of a plot by the duplicitous Magua (Wes Studi) to destroy the colonial invaders. Though inevitably hampered by the retrograde attitudes and representations of the source material, Mann’s Mohicans nevertheless gives its First Peoples characters (including the vengeful Magua) dimension and depth through its remarkable lead performances, with Day-Lewis dashingly embodying the stoic Hawkeye and actor activist Means bringing much-needed gravity to Chingachgook. The extraordinary period detail and stunningly staged battle scenes make Mohicans the rare epic to combine rigorous realism with eye-popping spectacle.
February 17

Heat
USA 1995 | 170 min. | R 35mm
Hard-boiled ex-con Neil McCauley (Robert De Niro) is the leader of a crew of seasoned stickup artists who operate with grim determination and military discipline. But when a last-minute replacement on his team leads to a bloody triple murder during an armoured truck robbery, McCauley is targeted by veteran detective Vincent Hanna (Al Pacino), whose fanatic dedication both mirrors and contrasts with McCauley’s ruthless professional expertise. Mann’s magnum opus ranks among the greatest crime films of all time, offering both an insider’s view of the games that cops and robbers play and finding powerful emotional resonance in the plight of those friends, lovers and family members trapped on the periphery of this closed world. While the virtuoso shootout sequence in the heart of downtown Los Angeles remains the film’s most iconic scene, the brilliantly underplayed coffee-shop confrontation between Hanna and McCauley — which marked Pacino and De Niro’s first time sharing the screen together — is the vital centre of Mann’s cinema, the culmination and summation of his perpetual themes.
February 19 & March 20 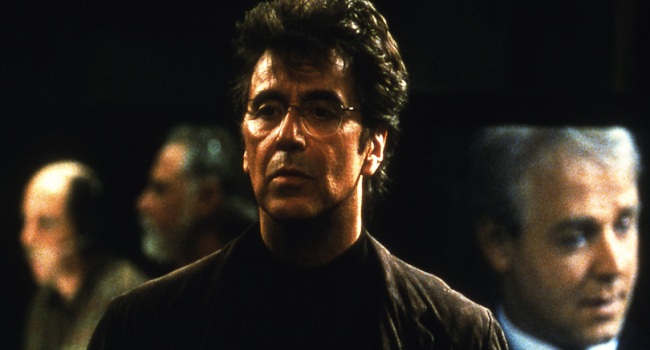 The Insider
USA 1999 | 156 min. | 14A 35mm
Based on the true story of Dr. Jeff Wigand — a chemist at tobacco giant Brown & Williamson who went on 60 Minutes to blow the whistle on his former employers and their professed ignorance of the addictive effects of smoking — The Insider is a brilliantly constructed and tautly told moral drama that explores both the rankest kinds of corporate greed and the always imperilled ethics of journalism. Russell Crowe stars as the conflicted Wigand, whose chance meeting with 60 Minutes producer Lowell Bergman (Al Pacino) leads him to endanger his family’s financial well-being, his future career prospects and, potentially, his life, in order to tell the truth about tobacco. Bergman, meanwhile, finds his principles put to the test when his own network — quailing before the threat of legal action — orders him to air a softer, heavily edited version of Wigand’s interview with Mike Wallace (Christopher Plummer). Exhilaratingly paced, brilliantly acted and morally complex, The Insider was Mann’s most acclaimed film, receiving nearly unanimous critical praise and seven Oscar nominations.
February 20

Ali
USA 2001 | 157 min. | 14A 35mm
Mann’s biopic of Muhammad Ali focuses on one of the most eventful periods of the legendary fighter’s life: the decade from 1964 to 1974 that saw him win the heavyweight belt from Sonny Liston, stripped of his title and threatened with imprisonment for his opposition to the Vietnam War and refusal to report to the draft board, and make an against-all-odds bid to regain the championship from George Foreman in the “Rumble in the Jungle” in Zaire. Will Smith underwent an astonishing physical transformation to play Ali, and impressively recreates both his deadly grace in the ring and the brash eloquence that earned him the nickname “the Louisville Lip”; he’s joined by a top-notch supporting cast including Jamie Foxx, Jeffrey Wright, Mario Van Peebles and Jon Voight (doing an astonishingly accurate impression of sportscaster Howard Cosell). Opening with one of Mann’s most indelible sequences — Ali’s training for the Liston bout intercut with a dynamic 1963 stage performance by Sam Cooke — Ali is “filled with vivid cameos and set to an infectious soul beat that effectively covers the underlying hum of calculated precision” (J. Hoberman, The Village Voice).
February 22

Collateral
USA 2004 | 120 min. | 14A 35mm
L.A. cabbie Max (Jamie Foxx) seems to have hit the jackpot when he’s hailed one evening by a nattily dressed businessman named Vincent (Tom Cruise), who offers him $600 to drive him to five appointments over the course of the night. At their first stop, however, Max discovers that Vincent’s business is murder, and he soon finds himself forced to play chauffeur to a hitman as Vincent traverses the city to make his bloody transactions. Returning to the crime-film territory he had made his own, Mann once again proves his mastery of action cinema with this taut thriller filled with dazzlingly choreographed violence, smooth-talking tough guys in slick suits, and the eerie iridescence of nighttime L.A. Cast against type, Cruise gives one of his most dynamic and ferocious performances as the ruthless assassin, while Foxx endows his everyman with charismatic amiability and all-too-believable vulnerability.
“This is a rare thriller that’s as much character study as sound and fury” (Roger Ebert).
March 12

Miami Vice
USA 2006 | 135 min. | 14A
Colin Farrell and Jamie Foxx take over from Don Johnson and Philip Michael Thomas as fast-living vice cops Crockett and Tubbs in Mann’s epic big-screen revamp of the TV series that made his name in the 1980s. When a FBI sting operation goes bloodily awry and one of their long-time informants winds up dead (along with his entire family), Crockett and Tubbs go deep undercover to infiltrate a transnational drug cartel. The super-cool super-cops soon discover that they are on to something much bigger than drug-smuggling — but personal and professional motives become dangerously intertwined when Crockett falls hard for the cartel kingpin’s right-hand woman (superstar Gong Li). Shooting exclusively on digital video for the first time, Mann and cinematographer Dion Beebe create a visual palette that ranges from swooningly gorgeous to brutally realistic; the sun, surf and speedboats gleam, while the astonishingly violent action sequences both shock and dazzle.
“Sensual and scary, the movie is so visually textured you feel as though you’re brushing against the screen” (Liam Lacey, The Globe and Mail).
March 13

Public Enemies
USA 2009 | 140 min. | 14A
In 1933, notorious outlaw John Dillinger (Johnny Depp) plies his bank-robbing trade in Chicago with the blessing of mob boss Al Capone, and finds romance with singer Billie Frechette (Marion Cotillard). When J. Edgar Hoover (Billy Crudup) transforms the Federal Bureau of Investigation into an elite, ultramodern interstate crime-fighting force with a mandate to tackle violent crime, Dillinger becomes their number-one target — but determined agent Melvin Purvis (Christian Bale) soon realizes that the only way to capture a quarry like Dillinger is to blur the line between cop and criminal. Both minutely detailed in its period recreations and urgently contemporary in its slick digital-video sheen, Public Enemies plays like a Depression-era Heat, with Dillinger’s daring yet precise bank raids the tommygun-and-fedora equivalent of Neil McCauley’s high-tech robberies. Mann pushes his experiments with digital video further than ever, producing images both preternaturally crisp and intoxicatingly murky.
“A grave and beautiful work of art … [Mann is] helping change the way movies look” (Manohla Dargis, The New York Times).
March 26

Ticket Information
Tickets can be purchased at the TIFF Bell Lightbox or via TIFF’s website.