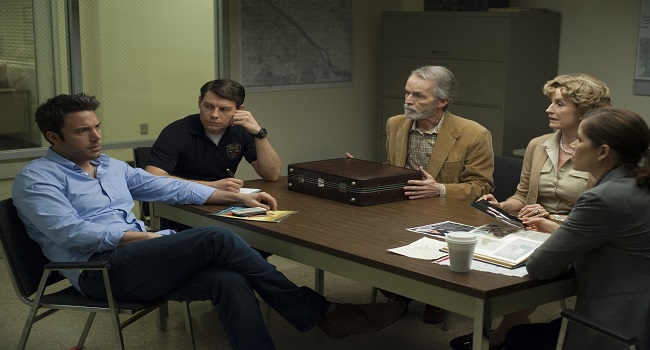 There are huge pitfalls to avoid when adapting a really popular novel. An important hurdle being that the book became famous for its unique ability to set fire to a readers’ imagination. Enter David Fincher, likely the only director who could have directed Gillian Flynn’s Gone Girl for the big screen, which she also adapted. The book tells the story first from Nick’s (Ben Affleck) perspective, then from Amy’s (Rosamund Pike). What the book does really, really well is manipulate your feelings towards these characters at different times. It lets us hear their innermost thoughts regarding the unfolding drama.

First we like the characters, then pity them, eventually hate them, and ultimately throw our hands up when it becomes clear that we cannot truly figure them out. Fincher, through both Affleck and Pike’s performances and the impressive score, manages to show us the same level of drama, without knowing what’s going on inside their heads.

One morning Nick gets a phone call and Amy is gone. The front door is open and it looks like there has been a struggle. Eventually, detective Rhonda Boney (the brilliant Kim Dickens) and Officer Gilpin (the underused Patrick Fugit) arrive to help. The search for Amy, which coincides with Nick and Amy’s 5th wedding anniversary, starts to make Nick look guiltier and guiltier. Though it appears to us that Nick is innocent – we can’t be truly sure. The introduction of Amy’s parents, who wrote children’s books about a fictional “Amazing Amy”, only serves to blur our beliefs further as they clearly have a complicated relationship with their daughter. By the time two of Amy’s old boyfriends enter the picture, we cannot help but start to wonder how much of Amy’s past plays into her current predicament?

So as not to spoil either the book or the film, I’ll leave the story there.

Pike and Affleck do a great job of capturing the perfect couple allure of Amy and Nick. They’re both a little older than the characters they play, but it doesn’t matter at all since they complement each other so well. Pike embodies Amy’s upper crust upbringing with a cold and distant air, while Affleck nails Nick’s laid back (given up) home town charmer who clearly hasn’t got a drop of ambition left for either his life or his marriage. So watching him plead for Amy’s return, while we wonders if he’s actually going to lead us to her body, is captivating.

The biggest challenge in Gone Girl is making both characters likeable, hateable, and everything in between. In my opinion, they succeeded. While I can’t speak to how the movie will play to those who haven’t read the book, I would be shocked if it didn’t make them want to read the novel immediately after watching it. The tension feels real, important, and completely unfair, no matter who we are rooting for.

View all posts by Jess Rogers