The notion of the American dream has always been best personified through the eyes of the immigrant experience. In countless films we have seen variations of the iconic image of people who have endure years of struggle finding solace at the first sight of the statue of liberty. A symbol of hope and opportunity, the torch wielding lady has inspired many to risk it all for a chance at freedom and boundless opportunity. The foreigner’s trials from poverty to success have become so romanticized that it is easy to forget just how grim the actual hardships were. It is this, often bleak, struggle that is at the core of James Gray’s latest film The Immigrant.

In this Depression Era melodrama, the frames of corruption are what house the rose-coloured lenses of the American dream. Set in 1921 we meet Polish immigrant Ewa Cybulska (Marion Cotillard) just as she and her sister Magda (Angela Sarafyan) arrive off the boat at Ellis Island. Anticipating a reunion with their aunt and uncle after fleeing the war, the sisters find themselves facing a whole new set of adversities before they even make it to the customs desk. Magda is immediately quarantined in the Ellis Island infirmary when doctors discover she is suffering from tuberculosis. If the idea of Magda being detained for up to six months, and facing deportation afterwards, was not shocking enough, Ewa must also deal with the possibility of her own deportation due to allegations of her being a woman of “low morals”.

As is the case with parables such as this one, Ewa’s saviour arrives in the form of a generous businessman named Bruno Weiss (Joaquin Phoenix). However, it does not take long for Ewa to realize that her knight’s armor is less than shining. Bruno is a hustler who preys on the weak. He claims to be a legitimate theatre man, but ultimately uses his burlesque production to advertise his stable of women. This is an arrangement that works well for everyone involved, including Belva (Dagmara Dominczyk), one of Bruno’s opportunistic performers.

Ewa’s arrival in this seedy underworld not only weighs on her faith, but also disrupts Bruno’s business in unexpected ways. Forced into prostitution, with hopes of saving enough money to buy her sister’s freedom, Ewa struggles with her subsequent hatred and reliance on Bruno. To further complicate things, Bruno’s interest in her goes beyond simple monetary matters. This makes things rather difficult for Ewa when a performer named Orlando (Jeremy Renner), a magician who happens to be Bruno’s cousin, begins to take a romantic interest in her. 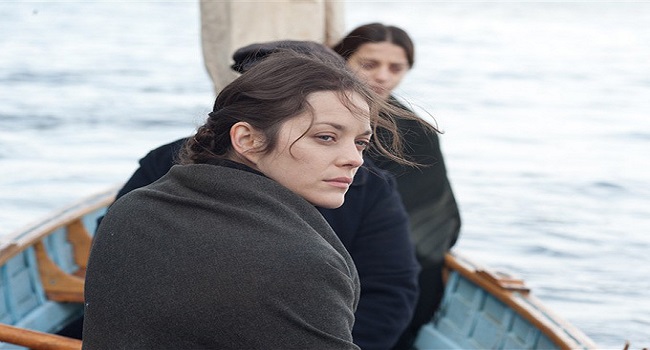 The Immigrant is intriguing not so much for its plot, but rather its overall execution. The visual elegance of the production, coupled with the strong performances, elevates what would otherwise be a convention tale. This could have easily been the period piece version of Boulevard or any other fresh of the bus, or in this case boat, tale of female struggle. However, by telling the story from an outsider’s point of view, Gray is able to subvert the American dream by making it something to fear and not idolize.

This is a version of America where even the sky seems to have a depressed brownish yellow tinge to it at times. A land where corruption and desperation are so intertwined that the lines between morality and survival become blurred. Even Ewa is forced to question if “it is a sin to want to survive?”

Gray’s soft-focus lens and lush cinematography lull us into a false sense of security. However, he never fully takes advantage of our disarmed state. The Immigrant does not quite hit the level of powerful resonance needed. Not for a lack of trying mind you. In fact, the cast does an admirable job in their given roles.

Marion Cotillard and Joaquin Phoenix are by far the standouts of the piece. Cotillard does a wonderful job of conveying the numerous emotions that Ewa goes through during her lengthy struggle. Her inner conflict is nicely balanced by the complex insecurities that reside in Bruno. In his forth collaboration with Gray, Phoenix ensures that Bruno is more than a simple predator. He is so good in the film that his performance exposes just how underwritten Orlando is by comparison. Renner tries his best, but Orlando’s lacks depth ultimately hinders the impact of the central love triangle.

Fortunately, there is enough in The Immigrant to overcome its shortcomings. Gray’s visual flourishes and the strong performances from Cotillard and Phoenix effectively bringing one woman’s struggles to life. The Immigrant does a solid job of showing the hardship and sorrow that often plagued the immigrant experience.