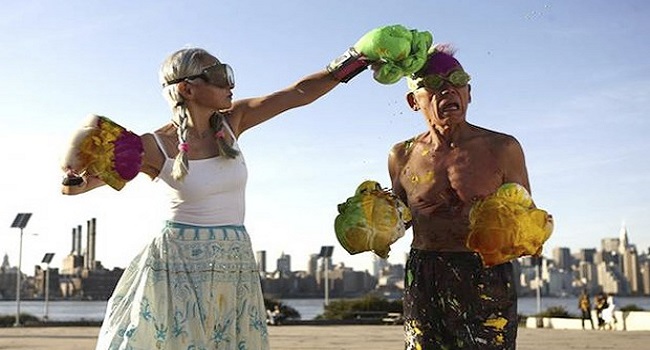 The love story between Ushio Shinohara and Noriko Shinohara has all the makings of a Hollywood romance. A young Noriko arrives in New York City with dreams of pursuing her artistic desires when she meets an established artist, Ushio, who sees her potential. The two fall in love and live happily ever after…at least that is what the typical ending would be. However, as we learn in Zachary Heinzerling’s charming film, if there is one thing Noriko cannot stand is Hollywood style endings.

In Heinzerling’s documentary Cutie and the Boxer we are provided with a true glimpse into a marriage that is not the match made in heaven that it appears to be. Reflecting on their 39 years together, we see that the Ushio and Noriko’s union is one of survival more than it is about love. It is a tale that is filled with misguided hope, struggle and neglect. Noriko came to America an idealistic young woman whose only passion was to be a true artist. She idolized Ushio who she frequently referred to as her “teacher”. Within six months of their whirlwind romance she was pregnant with their son, Alex, and started to see the true nature of what life with Ushio would really be like.

Though gifted, Ushio embodied the definition of a tortured artist. Beloved in New York for his unique style of art, which included the physical act of using boxing gloves to create some of his famed canvasses, Ushio’s finances never matched the acclaim his work received. It was simply too radical to sell. Similar to Jackson Pollock and other famed artist, Ushio spiraled into a vicious cycle of alcoholism that not only threatened his health, but also his marriage.

The most fascinating thing about Cutie and the Boxer is not the artistic process of Ushio and Noriko, but rather how their marriage impacted them as individuals. When Noriko remarks that “love is roar”, Ushio is perplexed by the statement, but we are not. For Noriko, her relationship to Ushio has been a difficult one filled with pain and poverty. Her words are often laced with resentment and anger. She talks about survival and independence in a way that sounds more like an abused woman overcoming her tormentor than a person madly in love with her spouse. 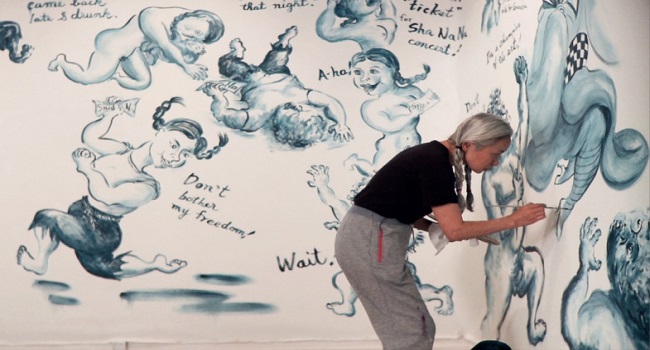 The ramifications of Ushio’s alcoholism are as pronounced in Noriko’s weary face as they are in the “Cutie” series she paints. Despite her love for Ushio, it is clear that she will always harbour a little resentment that she had to put her dreams on hold to take care of the family. She speaks of the freeing peace and quiet, that comes when Ushio takes a trip to Japan, like a woman who has been suffocating under the weight of his presence.

It would have been easy for Zachary Heinzerling to portray Ushio as the villain of the piece but, as with most things in marriage, things are never that black and white. If anything, Heinzerling takes an almost sympathetic approach to Ushio. Sober, and unable to fully see the extent of the damaged he caused, Ushio is still that same sensitive artist hustling to catch a break. Perpetually strapped for cash he, at 80 years-old, continually struggles to sell his work in an art culture more interested in the historical significance of a piece rather than years of sweat and talent. This is especially emphasized in a poignant scene in which a representative from the Guggenheim comes inquiring about Ushio’s work.

If there is one takeaway from the engaging Cutie and the Boxer, it is that the struggles that come with artistic pursuits and marriage are not so different. In some cases, like that of Ushio and Noriko, they are closely intertwined. Each road is paved with hardship and discarded dreams. Yet somehow we seem to endure and survive.