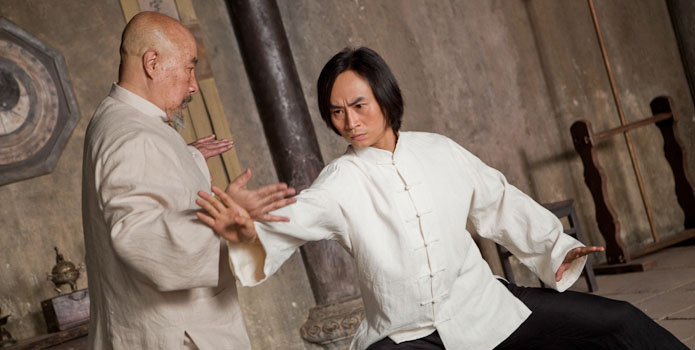 Keanu Reeves makes his directorial debut with the martial arts film Man of Tai Chi. However, those expecting Matrix level action will be disappointed as the film is as bland as Reeves’ own performance in it. It is not for lack of trying mind you, Reeves packs the film with plenty of punches and kicks to satisfy even the most casual action fans. The problem is there is very little else going on in the film outside of that. After a while even the fight scenes begin to blend together and the overall “wow” factor begins to diminish.

Man of Tai Chi is tale of how immense power clouds the judgment of a once decent man, Tiger Chen (played by Tiger Chen), and takes him down the path to the dark side. Tiger works as a courier by day and trains in the art of Tai Chi in his spare time. Though a gifted student, he routinely disobeys his master’s orders in regards to both meditation and not using Tai Chi for fighting. After displaying his skills in a televised martial arts competition, Tiger is offered a chance to work for a powerful security company run by Donaka Mark (Keanu Reeves). What few people know, and a determined Hong Kong police officer (Karen Mok) is trying to prove, is that Donaka’s security company is merely a front for his underground fighting show. Since it is dishonorable to use Tai Chi to fight for money, Tiger initially refuses Donaka’s offer to be one of his stable of fighters. However, when his master’s temple is threatened by a city redevelopment plan, Tiger sees no other way to raise the funds needed to save it but to step into the ring.

The thing that Man of Tai Chi lacks most is the depth needed to make the characters truly interesting. Tigers’ descent evokes little emotion as he is so poorly written. This is emphasized by how many times Donaka must verbalize everything that Tiger is feeling. Subjecting the audience to plodding lines such as Donaka stating “he has it in him” and “he likes it” referring to Tiger’s increasing taste for blood. This is carried over to the films police procedural subplot as well.

The lack of character development not only hinders the story, but the performances as well. The acting in this film either falls into the realm of bland or cartoonish. This is especially noticeable in Reeves’ villainous Donaka. Reeves never pins down the right tone for his character. Donaka is supposed to be a ruthless mastermind who is both a teacher and a manipulator, but the character comes off as plain silly instead of menacing.

Even if you are excited to spend 105 minutes watching people get kicked in the head, it gets dull rather quickly. Without any characters to become invested in even on a basic level, there is little in Man of Tai Chi to recommend.