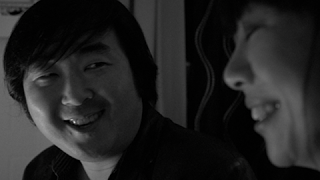 Indie singer-songwriter, Goh Nakamura, is back playing “himself” in Daylight Savings, a follow-up to last year’s Surrogate Valentine.  The film succeeds as a standalone film and is more like another chapter in the life of Goh Nakamura rather than a true sequel, so it’s okay if you haven’t seen Surrogate Valentine.  Daylight Savings finds Goh on the cusp of making a real name for himself as a musician.  He’s about to set out on his first national tour and his songs are appearing in TV commercials.  One of his songs is featured in a commercial for a drug that treats depression.  Goh has been in a long-term relationship with a girl named Erika and is planning to relocate from San Francisco to Los Angeles to live with her.  However, prior to his move, Erika dumps Goh via Skype.  “I’m just at a point where I can’t be in a relationship with someone just because I like them,” she tells him, while the anti-depressive drug commercial airs on the TV behind him.  Sweet, good-natured Goh can’t seem to catch a break with the ladies.
Goh’s friend throws him a surprise going away party.  Having just been dumped, Goh arrives depressed, sad and uncertain.  His mood brightens up, though, when he meets fellow indie rock musician, Yea-Ming Chen (of band Dreamdate).  They talk, they laugh, they flirt, they appear to hit it off, but rather than give Goh her number, Yea-Ming suggests that they let serendipity determine if and when they’ll see each other again.

Enter Goh’s cousin, Mike, who is going through the aftermath of his own break-up.  Mike convinces Goh that they should take a detour to Las Vegas en route to Los Angeles to see Yea-Ming play a gig.  Feeling confused and therefore easily swayed, Goh agrees and he and Mike set off for Las Vegas.  At this point, the film turns into a buddy road trip movie complete with random misadventures and all.  On the way, they stop in San Juan Bautista where they meet up with Mike’s colourful friend, Will “The Beast.”  Goh’s car is broken into, all of his stuff including his guitar is stolen and his playing hand gets crushed in a car door.  The road trip section of the film feels a lot like padding and random incident rather than an integral piece of the story.  The film gets back on track, though, when the boys arrive in Las Vegas.
Goh makes it to Yea-Ming’s show and the two enjoy a fun-filled night roaming the streets of Las Vegas and getting photographed with different Michael Jackson impersonators.  They end up in Yea-Ming’s hotel room and spend the night together, but things between them are left uncertain once again when talk of Goh’s five-day-old break-up with Erika surfaces and Yea-Ming questions whether she’s just a rebound. Goh eventually makes it to Los Angeles and brings Erika a plant that she left in San Francisco.  We’re left wondering, along with Yea-Ming, Erika and Goh, what will happen with this love triangle.  The film leaves open the questions, when is the right time for two people to be together?  How do you know who the right person is and how do you make the relationship work? 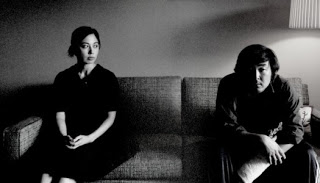 Daylight Savingsis an amusing and charming story, but the plot is a bit too simple and slight because the road trip section feels like its own detour from the main story.  That said, the film’s got some key things going for it, namely the genuinely engaging and likeable protagonists, Goh Nakamura and Yea-Ming Chen, who share wonderful chemistry together and are a dynamic and interesting onscreen pair to watch.  Goh and Yea-Ming are real, down-to-earth people, qualities that both musicians appear to genuinely possess.  They’re not actors merely acting as real and down-to-earth.  The classic black and white cinematography is beautiful to look at during the road trip section through California and into old Las Vegas, and the film’s soundtrack (performed by Nakamura and Chen) suits the story about a sweet, sensitive guy just yearning to make a lasting connection with dreamy, wistful songs.