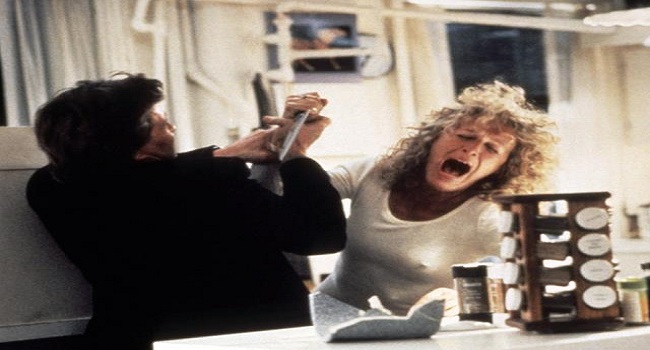 I vividly recall my mom covering my eyes during the sex scenes when I first watched this movie at 13-years-old. She didn’t want me to watch the film at all, but I insisted on watching what the grown-ups were seeing. Other scenes in the film were far more adult and disturbing, like a suicide attempt, a pet bunny boiling in a pot and an obsessed, mentally disturbed woman breaking into her lover’s home and attempting to kill his wife. Yep, my mom rued her decision to let me watch Fatal Attraction…big time.

When I re-watched the film years later and watched every scene, what I found most affecting was neither the sex nor the violence, but Glenn Close’s riveting and complex performance as Alex Forrest. Alex meets Dan Gallagher at a business party. Dan is a happily married man with a 6-year-old daughter and one weekend when his wife and daughter go out of town, he invites Alex out to dinner. Their attraction for one another is palpable. It’s as though the obsession that Alex ends up developing for Dan is foreshadowed in the way she looks longingly and seductively at him from across the table. It’s like she’s already hooked on him. Close says so much with that one simple look.

Alex finds Dan willing, seduces him and they have sex. Dan lets Alex know that their tryst is just a one-night stand, but Alex doesn’t see it that way. Right after the sex is over; Alex‘s obsession with Dan begins. She starts making demands of his time and attention. He tells her in no uncertain terms to get lost. She doesn’t appreciate being brushed-off and becomes pathological. She slits her wrists in a dramatic attempt to guilt Dan into being with her, and though he goes to her, consoles her and helps her bandage her wounds, he reiterates that their affair was just a fling. He believes that he has gotten through to her, but he’s wrong. 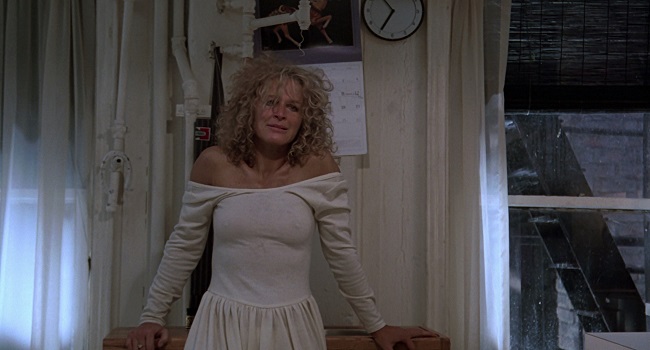 Alex visits Dan at work; she calls his home in the middle of the night and she even shows up at his front door where she meets Dan’s wife, Beth, and pretends to be interested in buying their home which is up for sale. Later, she reveals that she is pregnant, but it does not endear her to Dan at all. He first tries to reason with her, then ignores her and even threatens her, but Alex will not go away. His rebuffs only serve to enhance her jealousy and possessiveness, and she grows increasingly unhinged, forcing Dan to move his family out of town, but Alex remains undeterred, refusing to be ignored.

We never learn the details of Alex’s psychosis or really understand the inner workings of her mind and that, for me, is one of the film’s major faults. Still, Close’s portrayal of a disturbed woman scorned satisfactorily distracts us from this lack of detail. The film is also convincing in its attempt to provide commentary on relationships through its effective dialogue and sound psychological journey. Despite all of its fantastic drama and strong acting performances , I feel like the film fell short of its true promise as a smart thriller when at the end, it employed the clichéd horror movie ending where the “evil” character is believed dead, but rises up for one final scare.