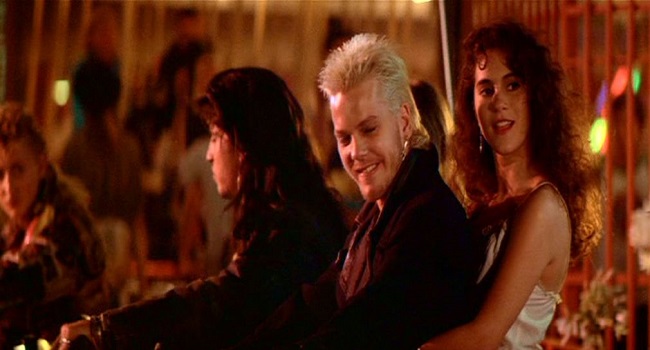 Before Twilight, there was The Lost Boys. Before Bella, Edward and Jacob, there were brothers Michael and Sam, their mother Lucy, their eccentric grandfather, the Frog Brothers and a bunch of teenage vampires. This cool, hip and funny film has a wickedly good cast including a young Keifer Sutherland and the two Coreys – Corey Haim and Corey Feldman. This horror film has no serious horror, but there are ample touches of tension and fright and a lot of humour. I’ve always liked this film and it’s not because it tells a great imaginative story, but because the cast of characters is so good.

Michael, Sam and Lucy move to Santa Carla, a small town in California with a vampire problem. The leader of the vampire pack sets his sights on Michael. The pack seem like no more than a group of young vagabond punk rockers with long hair and leather-studded jackets who hang out at the boardwalk, but they’re more than just ordinary punk kids. Michael is drawn to the group leader’s girlfriend, Star, and allows himself to be lured into their underground cavern where he unknowingly drinks blood from a bottle that he thinks is filled with wine.

When Michael starts lusting after blood, grows increasingly sensitive to daylight, sleeps all day and starts fading out in mirrors, his younger brother Sam freaks out. ‘My own brother is a blood-sucking vampire,’ he yells, ”You wait till Mom finds out.” The film is full of lines like these that are carried off with perfect naturalness and great comic timing from a wide-eyed, innocent Haim. Haim’s character is my favourite in the film. He is determined to prevent his brother from making his first kill and transforming into a vampire for good and he grows suspicious of everyone even thinking that the man his mother is dating could be the head vampire.

Sam enlists the help of the Frog brothers, two self-proclaimed vampire hunters he befriends at a comic book shop. The Frog Brothers are versed in the ways of vampires thanks to the numerous comic books they’ve read about them and they school Sam on the symptoms of vampirism and on the best ways to exploit a vampire’s weaknesses. Together they decide to go after the vampire gang. They want to kill the unknown head vampire to turn Michael back into his normal human self.

When Sam and the Frog brothers penetrate the vampire cavern we’re treated to some pretty cool special effects with striking images of white-faced, fang-toothed vampires hanging by their toes from rafters and flying and fighting in the air. There is a menacing undercurrent and eeriness when the film enters their world, but it’s never scary enough to make you want to hide under the covers. The film maintains too much humour to ever be terrifying.

In the lead up to the big climactic fight scene between vampires and humans is my favourite part of the film. Sam and the Frog brothers, convinced that Sam’s mother is dating the head vampire, outfit Sam’s house with a series of vampire booby traps; a bathtub filled with holy water and garlic along with a couple of water guns loaded with the same for good measure; some garlic finely grated to look like parmesan cheese and a few crucifixes. Unbeknownst to Sam and the Frog brothers, the head vampire is impervious to such things and it’s amusing to see the young kids throw every trick up their sleeve at him without any effect. Here the film employs the traditional vampire mythos and doesn’t try to do anything different or unique, but it works for this film.

The ending is a perfect blend of exciting action and comedy and a great one-liner by Michael and Sam’s kooky grandpa:”One thing about living in Santa Carla I never could stomach, all the damn vampires.” It’s one of my favourite 80s films and even if you’re not into vampire movies, it’s worth checking out if you haven’t seen it and worth revisiting if you have.