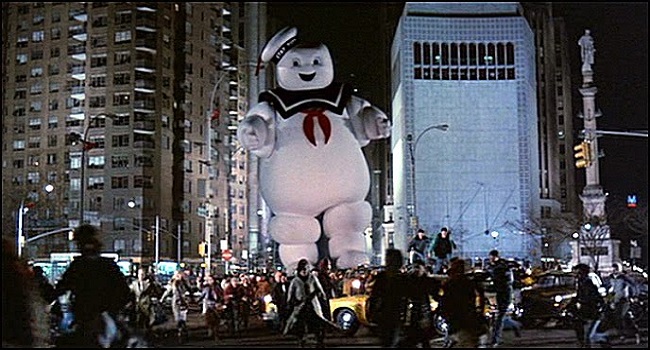 Ghostbusters will forever be one of my all-time favourite movies. I remember being addicted to the cartoon when I was a kid too.There was something so entertaining and fun about a group of guys chasing ghosts and I think it was because none of it was the least bit scary.It was all campy, silly, amusing and fun. There was something so appealing about knowing who to call when something strange was going on in the neighbourhood and having those four guys with proton packs show up to zap the strangeness away.

The film works on every level. It takes two approaches – a special effects blockbuster and a smartly, slyly written comedy with great dialogue – and it puts them together very successfully.The cast absolutely rocks too.Harold Ramis, Bill Murray, Dan Akroyd and Ernie Hudson as the spook exterminators make the movie. Their one-liners are unforgettable. All four actors are perfect contrasts to the other.Add to that great group Sigourney Weaver, Rick Moranis and Annie Potts, and you’ve got the cream of the comedic crop of 80s actors. The script penned by Ramis and Akroyd is funny and intelligent. The dialogue and delivery perfectly captures the understatement, irony, inside jokes, goofiness and cliché intended by the script. So many lines from the film are instantly quotable.“We came, we saw, we kicked its ass!”

The special effects are quite superb for that era, and they’re not just in-your-face, jaw-dropping, effects for the sake of effects – they serve a real purpose and don’t dominate everything else to distract from the comedy. They serve the actors rather than the actors serving them. It’s not just about having the actors pose in front of or around them.Everything works well even though the plot is outrageous – a conduit to another world full of supernatural beings is opened in the middle of Manhattan and these exterminators, much like the Orkin men, ride in to save the day armed with nuclear-powered backpacks in a showdown between good and evil. Spooks are showing up everywhere and people are going nuts, so they start calling up the Ghostbusters and the guys become overnight celebrities.

There are keymasters, gatekeepers, green slimy spooks and a large Marshmallow man. The premise is definitely an original one and could easily have resulted in a stupid mess of a film (a la Howard the Duck), but it didn’t. It’s as clever as it is silly and it has become one of the most iconic, entertaining and beloved films of all time. It doesn’t matter if you’re a boy or a girl, young or old, seeing it for the first time or have it memorized by now – it’s a comedy that appeals to all, and how about that catchy theme song? Eighties comedies (or any comedies, frankly) don’t get any better than this.