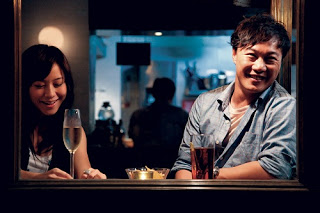 There is a line near the beginning of the film Lover’s Discourse that refers to love being an improvised performance between a couple that can never be repeated with another. However, this does not mean that the characters will not try their best to defy this rule. Despite the scientific and philosophical points, which appear at the opening of the film, when it comes to love, there is only one certainty, it will always be complicated.

Lover’s Discourse is structured around four seemingly separate vignettes that look at the joy, betrayal and redemption that is often associated with love. One story is about former lovers, Ray (Eason Chan) and Nancy (Karena Lam), who reunite for friendly drinks and conversation. Although they are both in long term relationships, their conversation reveals a level of intimacy that cannot be duplicated with their current significant others. Another segment explores a laundromat worker, Gigi (Kay Tse), who is infatuated with one of her customers, Dr. Lai (Eddie Pang). There is also the tale of a school boy who is obsessed with his best friend’s mother (Kit Chan). The final segment involves two individuals, Kay (Mavis Fan) and Paul (Jacky Heung), who team up to investigate whether their partners are being unfaithful.

Directors Derek Tsang and Jimmy Wan ensure that each of the four vignettes in the film have their own distinct feel. One of the highlights of the film comes in the genre jumping second segment. Gigi is constantly envisioning herself in different romantic scenarios with Dr. Lai. Hilariously, Dr. Lai is portrayed by a mannequin in the fantasy sequences. In each new fantasy the mannequin is dressed up in harlequin style wardrobe to fit each period. Tsang and Wan use the mannequin to emphasize how we all create distorted images of the people we have crushes on. For her part, Kay Tse gives a wonderful performance in these scenes. She manages to keep each fantasy scene consistently amusing without drifting into farce. 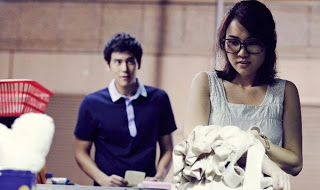 Lover’s Discourse does a good job of linking all the stories together without sacrificing the content of the film. The last segment, in particular, is the perfect example of this. This portion of the film plays like a more romantic version of Strangers on a Train while managing to touch on elements in the previous segments. The segment also demonstrates the darker side of love which Nancy and Ray mention in the first story. The two characters highlight how relationships start off exciting, become mundane, and end in hate. While Lover’s Discourse does not necessarily end on a sour note, the film does get noticeably darker as it progresses. Tsang and Wan starts their film off on a rather eloquent and engaging note with a couple that the audience wants to see together. However, as obsession and lust creep into the film, Tsang and Wan begin to question if people are actually together for love or for fear of being alone. The idea of being in love often clouds the mundane reality of what relationships are actually like.

Lover’s Discourse is a solid debut for Tsang and Wan. Clearly students of foreign cinema, the film has a distinct European feel in the latter half and the pair display a good understanding of how to weave together interesting stories. Though the film could have used tighter editing in some sections, there were enough enjoyable moments to make the audience eager to see what subject the directors will tackle next.