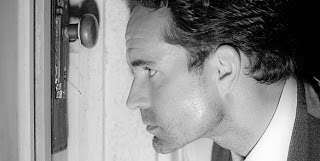 There are some films that reward the audience instantly for sticking with it and then there are others that require multiple viewings before one can truly understand the director’s goal. Keyhole is a film that fits in the latter category. It can be processed in different ways depending on the number of times you see it. The question is how many people will be willing to sit through the film more than once?

Taking its cue from both Homers’ The Odyssey and traditional ghost stories, Keyhole follows a gangster named Ulysses (Jason Patric), who returns to his childhood home in a quest to be reunited with his wife Hyacinth (Isabella Rossellini). Aided by Denny (Brooke Palson), a woman who drowned but is now back to life, and a bound hostage, Manners (David Wontner), Ulysses must make way his way through each room in the house. Complicating issues even further, Manners is actually Ulysses’ son, although Ulysses does not realize it. As he makes his way to the bedroom where his wife and the spirit of her father are (Louis Negin), Ulysses slowly begins to recollect all the events of his past.

Those going into Keyhole expecting The Odyssey told as a 30s gangster tale will sorely be disappointed. Even director Guy Maddin himself has stated that he views the film as “an autobiography of a house”. While it is obvious that the house has witnessed a lot over the years, it does not necessarily make for a coherent tale. Keyhole often feels like a piece of art that only the artist, in this case Maddin, truly understands.

Diehard Guy Maddin fans may eat up Keyhole’s artistic excess but most others will find the film impenetrable to decipher. The frustrating thing about Keyhole is that it has the potential to be a very good film. If nothing else, the film is far from boring as Maddin injects the film with humour and several inspired moments. Setting the entire film in the confines of one house does the story a grave disservice as many of Maddin’s ideas are never fully realized.

Despite featuring the acting talents of Patrics, Rossellini, Negin, and Udo Kier, the performances in the film are all over the place due in part to the uneven level of melodrama in Maddin’s script. The actors rarely seem to be on the same page in regards to what the overall tone should be. Again, everything may actually come together nicely upon multiple viewings of Keyhole, but it is tough to think that anyone besides hardcore Maddin fans would want to subject themselves to this mess more than once.