Every year there are a bunch of films that screen at TIFF which arrive with little to no fanfare at all. It seems even the press seem to overlook these films for some reason or another. The fascinating thing is, once given the chance, that these films often turn out to be hidden gems. They are films so moving that it is perplexing how they got lost in the shuffle in the first place? In many ways Karl Markovics‘, best known for his acting work in the film The Counterfeiters, directorial debut is one of these films.

Breathing tells the tale of Roman (Thomas Schubert) an 18 year-old living in a juvenile detention centre. Roman’s latest parole hearing is coming up and his parole office, Walter (Gerhard Liebmann), is pushing him to secure a job through the day-release program. Roman’s track record with the program so far has been a disaster and his previous requests for parole have been denied. Feared by the other juveniles at the facility, Roman keeps to himself as his short fuse is always one small incident away from igniting. Walter begins to wonder if Roman even wants to be released at all? Considering he is locked up for murder, Walter finds it odd when Roman finds a job moving bodies back and forth to the city morgue. Roman sees it as something to keep Walter from harassing him, but little does he know that this job may be just be the thing he needs to truly start appreciating life.

One of the most remarkable aspects of the film is that it never travels down the road you expect it to. Instead of falling into the temptation of playing major scenes to the maximum melodramatic effect, Markovics opts for moments that are subtler, and as a result, more powerful. In one mesmerizing scene Roman has a crucial moment with his biological mother, Margit (Karin Lischka) who but him up for adoption years earlier. When Margit reveals why she abandoned Roman it is done is a realistic, and some may argue cold, way. There are no screaming matches and no pleading for forgiveness. 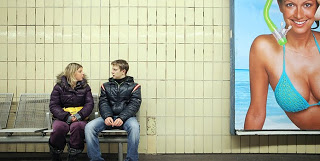 Karl Markovics’ wonderful use of restraint in Breathing can easily be summed up in the character of Roman. Even when he is on the brink of exploding emotionally he maintains a relatively stoic demeanour. For his part, first time actor Thomas Schubert gives an outstanding performance as Roman. He manages to keep the character both interesting and real throughout the film. Having to carry the bulk of the film, Schubert’s work never feels forced. He really brings Markovics stunning script to life. Schubert conveys the same level of trust in Markovics, that Markovics has in the audience.

Markovics’ script is consistently good without ever divulging too much information. He shows trust in his audience by leaving many moments open to interpretation. Markovics provides just enough information so that you have a clear understanding of his vision and the overall story, but lets the audience fill in the blanks. Breathing is a striking debut from a director who clearly has an eye for great storytelling. Once viewed, it becomes clear why Breathing is Austria’s official submission for the Best Foreign film category at the 2012 Academy Awards. Just because it has not received the high profile buzz like other films at TIFF, it does not mean it should be missed.