There was a time when a cinematic villain achieved greatness by the sheer level of evil they displayed. Whether they used “the force” to choke an insubordinate from a distance or created chaos simply to show the citizen of the city they terrorize that they “deserved a better class of criminal,” they struck fear in the hearts of the those who crossed their path. For years Cruella de Vil rightfully held a seat at the illustrious table of high calibre of villains. A woman who desired a coat made from dalmatian fur and would stop at nothing to get it. It turns out, judging from Disney’s live-action film Cruella, that Ms. de Vil’s diabolical ways were not birthed out of inherent malice, but rather societal circumstances beyond her control.

Much like fellow Disney villain Maleficent, Cruella de Vil (Emma Stone) started as a feisty but kind-hearted girl named Estella who found herself unexpectedly traveling down a dark path. Orphaned at a young age after witnessing her mother’s tragic death, an event she blames herself for, Estella ended up homeless on the streets of London in the 1970s with only her trusty dog to keep her company. Befriending and forming a makeshift family with fellow orphans Jasper (Joel Fry) and Horace (Paul Walter Hauser), the trio made a life for themselves by pulling off various thefts and cons. Despite their modest success grifting, thanks in part to the costumes she created, Estella longed to be a professional designer at one of London’s high end fashion brands.

When the opportunity to work in the affluent Liberty of London clothing store arise, albeit as a member of the custodial staff, she thought her criminal ways were officially behind her. Determined to climb that corporate ladder from the ground up, Estella’s dreams take an unexpected turn when a drunken night of inspiration leads to one of her designs catching the eye of the Baroness von Hellman (Emma Thompson). An iconic fashion designer, whose bristly demeanour could give The Devil Wears Prada’s Miranda Priestly a run for her money in the wicked boss department, the Baroness hires Estella to be one of her brand’s designers. 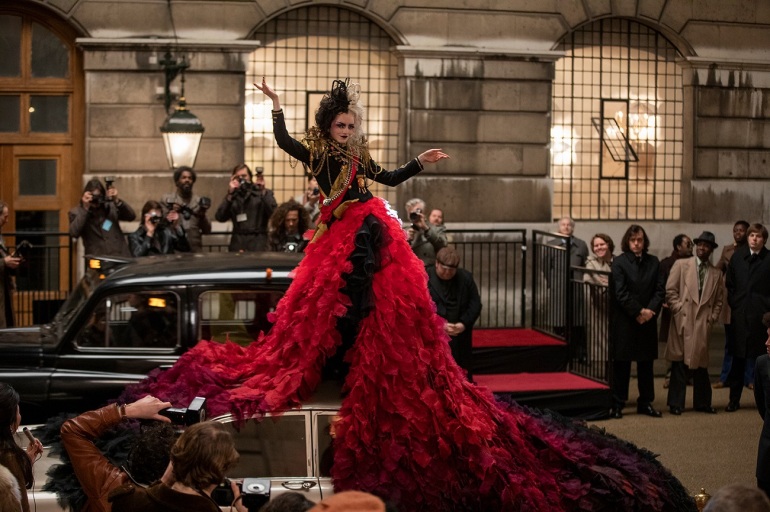 Seeing the immense talent Estella holds, the Baroness begins grooming her to be one of her closest aides. However, when a revelation links the Baroness to her mother’s death, a revenge-bent Estella sets a plan in motion that will have her embracing her evil side while posing as a rival fashionista named Cruella.

Craig Gillespie’s film really ramps up once Cruella makes her emergence during a rather amusing heist sequence. Playing up the battle of evil wits that occurs between Cruella and the Baroness, the film takes much joy in showcasing the inventive ways Cruella attempts to upstage her rival. These moments not only highlight the great art direction in Cruella, but also the brilliant costume work as well. As if an unspoken, but important, character in the film, Jenny Beavan’s costume designs are sensational. Each new outfit adds an extra layer to both the characters’ personalities and the overall vibrancy of the version of London they inhabit.

Although clad in the garb of the punk aesthetic of the 70s, Cruella never feels as rebellious as it clearly wants to be. Much like a high school student trying to define themselves as different, while draped in the same clothing as their peers, the film struggles to find its own unique cinematic identity. One is always aware that the film is unfortunately handcuffed to the 101 Dalmatian films that preceded it.

While Gillespie’s film is unable to break free of the shackles of the past, Emma Stone does a wonderful job of making the iconic villain her own. This version of Cruella de Vil may be a more sympathetic character this time around, but Stone never lets the audience forget the wickedness taking shape within. It helps that Emma Thompson’s work as the Baroness not only rivals Stones but gives audiences a narcissist to despise even more than Cruella in her dognapping years. The combination of Stone and Thompson’s devilishly good performances and the vibrant costumes design ultimately make for an entertaining, if at times uneven, film. While one may not believe that this version of Cruella de Vil would ever dream of killing dogs, the seeds are planted to ensure it is not outside of the realm of possibility.