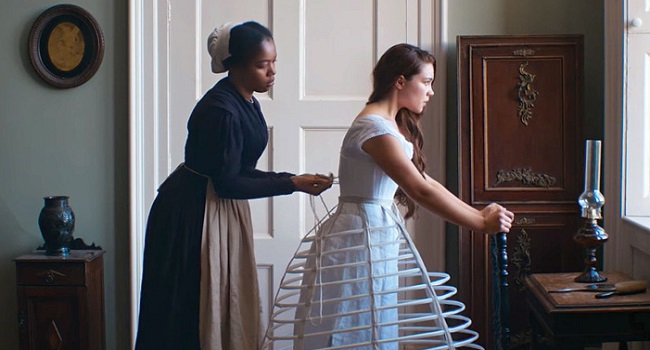 In the Behind the Scenes of Lady Macbeth feature on the Lady Macbeth DVD, which arrives today courtesy of D Films, director William Oldroyd remarks that he was taken by the idea of a woman defending herself via whatever length that might entail. It is this mixture of perseverance and ruthlessness that makes Oldroyd’s film both enthralling and, at times, frustrating.

Set in rural England in 1865, Oldroyd’s adaptation of Nikola Leskov’s novel Lady Macbeth of Mtsensk focuses on Katherine (Florence Pugh giving a blisteringly good performance) as she tries to adapt to life after being sold into marriage. Living under the strict rules of a husband, Alexander (Paul Hilton), who refuses to touch her intimately, and her domineering father-in-law Boris (Christopher Fairbank), Katherine is expected to fulfill the role of the housebound heir maker. When both men are called away on business, Katherine not only starts to embrace her freedom, but also strikes up an affair with Sebastian (Cosmo Jarvis), a worker at Alexander’s estate.

Becoming careless in her defiant actions, Katherine will stop at nothing to keep her indiscretions a secret. However, as the body count begins to rise, and newly uncovered secrets threaten to place her in a whole new set of confinements, Katherine and Sebastian must decide just how far they are willing to go to stay together.

Lady Macbeth presents an intriguing look at the lengths the oppressed are willing to go to become the oppressor. The audience empathizes with Katherine at first as she is forced to adhere to the patriarchal structure society has birthed. A society that expects her to spend her days sitting quietly indoors and being subservient when her husband exerts his power by demanding that she stand naked starring at the wall. However, the lines between the oppressed and the oppressor become increasingly blurred as Kathrine asserts her own power.

The more the audience cheers on Katherine’s defiance, the more complex the film’s themes of female empowerment become. Yes, the film can be viewed with a feminist slant, but whose feminism is it really celebrating? Katherine’s empowerment frequently comes at the cost of the servants, especially the black handmaiden Anna (Naomi Ackie in a wonderfully understated performance), whom she always has a higher status over regardless of her actions. It is through her increasingly selfish actions that it becomes clear that the real villain of the piece is not the social conformity that Alexander and Boris, representations, but Katherine herself.

The DVD only features a select number of special features, with the highlight being the aforementioned Behind the Scenes of Lady Macbeth being the most informative piece. Regardless of some of its problematic themes, Lady Macbeth is an engaging film that is definitely worth your time.