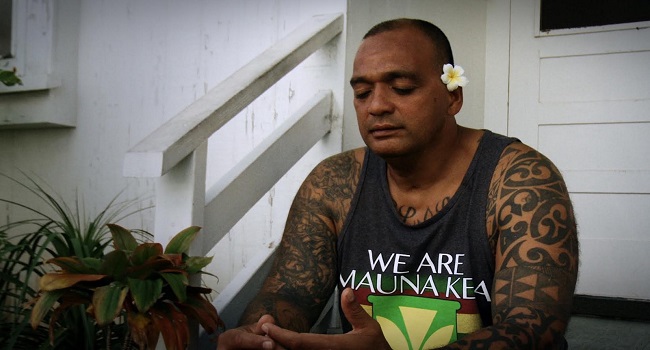 The prisons in Hawaii are getting so overcrowded that many inmates who were charged and convicted in their home state are flown out of state to be incarcerated. This has started to happen so frequently that eventually an entire institution has been built in Arizona just for Hawaii’s prisoners. A disproportionate number of these prisoners are Indigenous Hawaiians.

Ironically, many of these inmates come to feel more connected to their own culture than ever before once leaving the state. This is largely due to the influence of Kalani, who while serving a life sentence, teaches traditional dance and encourages them to learn more about their heritage. He acknowledges that adjusting to life upon release won’t be easy and counsels them on healthy choices that will hopefully keep them from being reincarcerated.

We meet David and Hale while they’re both still incarcerated in the Arizona institution and continue to follow them once they’re released. Both feel reconnected to their culture and are committed to staying away from drugs and doing what they can to make up for the hurt that they’ve caused. David has a daughter who he wasn’t around to raise, and a grandchild whom he’s never met, so he is eager to make up for the all the lost time. Hale has met a woman that he loves and wants to marry.

Both men have done some pretty bad things, but their remorse and desire to change feel sincere. This makes them both easy to root for. They’re cautiously optimistic and have the right attitude but, as promised, life on the outside isn’t always going to be easy. David in particular has a lot of debt and some trouble keeping a job. The challenges are unavoidable but Out of State is all about hope and resilience. You’ll want them to succeed and they’ll make you proud. This is a documentary that gives you faith that people really can change and that rehabilitation really is possible under the right conditions.

Ticket information can be found at the imagineNATIVE website.