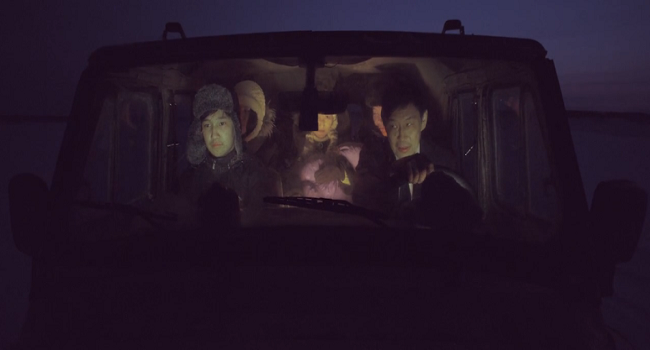 The cold desolate Siberian landscape can be both a place of beauty and a place of terror. In Michail Lukachevskvi’s thriller A White Day, the nighttime air is not the only thing that provides chills. Documenting how one seemingly harmless decision can have devastating ramifications, Lukachevskvi’s film has a rather novel premise.

The story revolves around a group of strangers who are traveling back to their various homes in a van. When the driver of this makeshift taxi refuses to stop for an elderly man, who clearly needs a lift on the isolated road, karma finds a way of harshly blind siding the group. After a deer jumps out of the darkness and collides with the vehicle, the passengers find themselves stranded in the middle of nowhere with a van whose battery has died.

As the frigid night air begins to settle in, the group must not only worry about surviving Mother Nature, but also the van’s driver who is spiraling into madness.

A White Day is a film that is full of promise, but does not quite come together as smoothly as it should. While Lukachevskvi stirs up good tension from the way the circumstances impact the five inhabitants of the vehicle, six if you include the baby, it does not mask the fact that some of the characters are underwritten. Outside of the driver, whose deranged manner gradually builds, there is not much to the characters besides the basic outline (e.g. student, couple with child, etc).

To a certain extent, the same can be said for the subplot involving the troubled marriage of Saryial’s, one of the passengers in the van, parents. Watching them bicker over their growing disconnection is fascinating enough, but ultimately feels at odds with the thriller unfolding at the film’s core. Frankly, these sequences simply do not carry the same emotional punch that is found in the latter sections of the main arc.

Lukachevskvi’s film is at its most intriguing when it focuses on both the driver’s lack of morality and the spiritual mysticism of the region. The last act, in particular, is very effective in this regards. While A White Day does not hit the mark, the potential is clearly there. The performances are solid and cinematography does a good job of showing both the beauty and the dread of the land. It is just too bad that the characters were not fleshed out in greater detail.